As Germany officially bid farewell to Angela Merkel on Thursday, a new era dawns in Europe’s largest economy. After 16 years, the end of Merkel’s chancellorship also marks a new beginning for U.S.-German relations, after Germany’s first female chancellor liaised with four different U.S. presidents during her time in office.

After getting elected during George W. Bush’s second term, Merkel was particularly close with Barack Obama, who describes Merkel as "reliable, honest, intellectually precise and friendly in a natural way,” in his memoir “A Promised Land”. During Trump’s presidency, transatlantic relations cooled noticeably, as Merkel and Trump often didn’t see eye to eye in questions of international cooperation.

According to data from the Pew Research Center and the German Körber-Stiftung, that was reflected in the public’s view of U.S.-German relations, at least from a German perspective. During Donald Trump’s time in office, the majority of Germans saw the relationship between the two countries as bad and stopped considering the U.S. their country’s most important ally when it comes to foreign policy.

Since Joe Biden has taken office in January, Germans’ view of their overseas partner has improved noticeably, with 71 percent of Germans now seeing the relationship between the two countries as good. While American views of U.S.-German relations never dipped as far during the Trump presidency, Americans seem to notice a recent improvement in the partnership as well. 85 percent of Americans now consider the relations to be good, up from 74 percent in 2020. 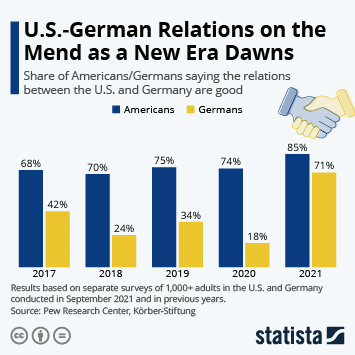 This chart shows the percentage of Americans and Germans describing both countries' relationship as bad.