88.9k
Ounces, inches, feet and Fahrenheit – to most people on Earth these measurement units are unfamiliar or a distant memory. Only three countries – the U.S., Liberia and Myanmar – still (mostly or officially) stick to the imperial system, which uses distances, weight, height or area measurements that can ultimately be traced back to body parts or everyday items. Other than in the metric system these units are not easily divisible in parts of hundreds or thousands and are therefore thought to be inferior to those in the metric system by some. Critics of the metric system which was created for easy reference accuse it of being arbitrary in return.

The United States is the only real stronghold of the imperial system in the world to-date. Here, using miles and gallons is the norm, even though scientists do use metric, new units like megabytes and megapixels are metric as well and runners compete for 100 meters like everywhere else in the world. Myanmar and Liberia are the only other countries in the world that haven’t officially adopted the metric system yet. In both countries, metric measurements are used alongside imperial ones. But the countries have said they want to switch over to the metric system or are in the process of doing so. The U.S., as well, has made many grand declarations about metric use in the past, and has even made metric “the preferred system of weight and measure” in 1975 (without officially abandoning the imperial system). Yet, the whole plan never quite caught on.

The UK is the country stuck in the middle of both systems, being the birthplace of the imperial system itself. Here, metric is partially adopted but miles persist, and people routinely refer to pints, miles per gallon, pounds and even stone in their everyday lives. Some imperial measurements are still around in former Commonwealth countries like Canada, India, South Africa or Australia as well, where people might refer to their body height and weight in imperial units or put together a cake recipe in cups and tablespoons before shoving it into an oven with a Fahrenheit scale.

Then again, some products are persistently imperially measured around the world, irrespective of the country. Jeans sizes measuring waist and length separately really are just inches, and piping and screen sizes are also referred to in inches almost everywhere. Finally, pizza pies measured in inches have been spotted in (mostly) metric countries like Australia and Canada. 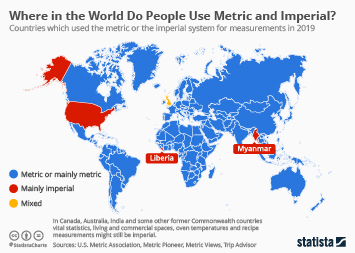 This chart shows countries which still (officially) use the imperial system.