Skip to main content
53k
74.6k
87k
88.9k
U.S. college students currently working on their degree are in for an unpleasant surprise when negotiating their first salaries. That’s according to a new study conducted by Clever, which found that undergraduate students in the United States are overestimating what they’re worth by a varying degree, depending on the major. Comparing average expected salaries to median actual salaries as reported in PayScale’s College Salary Report, Clever reveals which majors are particularly prone to unrealistic expectations.

“Bushy-tailed and bright-eyed, the average Generation Z undergraduate expects to make $57,964 one year out of college, while the national median salary is $47,000 for recent grads with bachelor degrees who have between zero and five years of on-the-job experience,” Clever writes, concluding that many students have “seriously unrealistic” expectations for their early career salaries.

As the following chart shows, Business majors are in for the rudest awakening, overestimating their early career salary by almost $15,000 a year. At the other end of the spectrum, Computer Science majors are in for a pleasant surprise when they enter the working world: according to Clever’s findings, they are underestimating their earnings potential by nearly $10,000. 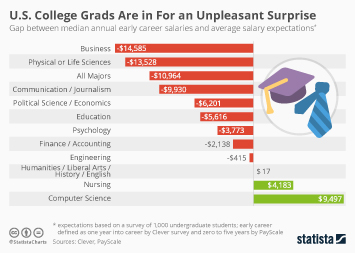 This chart shows the difference between median annual early career salaries and average salary expectations of college undergraduates in the United States.