TikTok is a video-sharing social media app owned by Beijing-based tech company ByteDance. Launched in 2017 as the international version of popular Chinese platform Douyin, TikTok quickly rose to global popularity after the acquisition of Musical.ly in 2018. The platform, which was particularly popular in the United States for lip-synced short videos, merged within TikTok in August of 2018. After the acquisition, TikTok not only consolidated its global audience but also increase its first-time installs by almost 400 percent year-over-year, reaching 740 million new users in 2021.

How many TikTok users are there?

In July 2021, TikTok reached the milestone of three billion downloads worldwide, despite being banned in India the previous year and losing a considerably large audience. While TikTok app downloads slowed down during the first half of 2021, the popular video app still ranks as one of the leading apps in the Google Play Store and the Apple App Store worldwide. User figures have soared and continuously increased on both Android devices and iOS devices, reaching over 30 million and 120 million monthly active users in January 2022, on the respective platforms.

TikTok’s immense popularity mirrors one of the most significant technological trends of the past decade, the shift from desktop to mobile. It also reflects recent changes in internet user behavior, such as shorter attention span resulting in short-form video platforms becoming major players. This phenomenon was especially underlined during the coronavirus pandemic, with quality, storytelling, and accessibility standing out as main reasons to watch short videos. In 2020, mobile users spent a large amount of time with mobile apps, and while usage rates have been normalizing in 2021, social media platforms still account for the biggest share of users’ demand. Whether it is professionally produced or user-generated – online video content is proving vastly popular with social media consumers, and it is, therefore, expanding across established platforms like Instagram and serving as a springboard medium for newcomer applications like TikTok.

But who are the millions of users flocking to TikTok and spending over 824 million U.S. dollars on the short video app? As of January 2022, the United States and Indonesia had the largest TikTok audiences with 131 million and over 92 million users engaging with the popular social video platform, respectively. At the beginning of 2022, Ireland and the Nordics experienced an increase in TikTok downloads in Google Play Store, while iOS devices saw an increase in downloads in Latin America and Nigeria.

What makes the app a global phenomenon, however, is its age demographic. TikTok allows users to create, edit, and share short-form video clips that are jazzed up with filters and accompanied by the latest music trends. While this premise may not sound particularly appealing to internet users over the age of 35, the platform has proven to be highly successful with younger audiences. As of January 2022, 25 percent of TikTok users were women aged between 18 and 24 years, while men in the same age group accounted for around 18 percent of the platform’s user base, while as of August 2021, the majority of content creators on TikTok were aged between 18 and 25 years old, a factor that contributes to the platform being popular among Millennial and Gen Z users. In 2021, 25 percent of TikTok users in the United States were teenagers or even younger, a generation of heavy smartphone users constantly in touch with trending content.

By following, commenting, and liking other people’s videos, TikTokers have created a new ecosystem of online video content and even produced their own net of teen celebrities. Charli d'Amelio, the world’s most-followed TikTok creator/influencer, had over 136 million followers on the app in February 2022, and this internet fame also kickstarted a real-world achievement including appearances on Super Bowl, Disney, as well as receiving a Guinness World Record for most followers on the platform.

In 2021, ByteDance was the leading unicorn company worldwide, with a valuation of over 350 billion U.S. dollars. While talks of a future initial public offering have resumed in 2022, there are still several obstacles the company will need to overcome to obtain the markets’ trust. To distance itself from the allegations of transferring international user data back to China, TikTok was separated entirely from ByteDance’s Chinese operations in 2019. The platform, which is now being run on a different server than Douyin, faced the threat of a possible ban in the U.S. under Trump’s presidency in August 2020. In March 2022, it was announced that TikTok was in talks with the Committee on Foreign Investment in the United States to arrange third-party data hosting of all its U.S. users’ information. In doing so, the Chinese ByteDance would not be able to access the data, and TikTok would have fewer chances to face the threat of a ban in one of its major global markets.

Apart from institutional scrutiny, ByteDance must face fierce competition from mainstream social media, including market-leader Meta. In 2021, less than six in 10 Gen Z users in the U.S. engaged with Meta-owned Instagram, while in contrast, 63 percent of users in the same demographic group were using TikTok. In 2021, as Facebook recorded a drop in engagement with its mobile app, TikTok saw users spending approximately 20 percent more hours on the platform’s video content compared to the previous year.
This text provides general information. Statista assumes no liability for the information given being complete or correct. Due to varying update cycles, statistics can display more up-to-date data than referenced in the text.
Published by L. Ceci, Nov 23, 2022 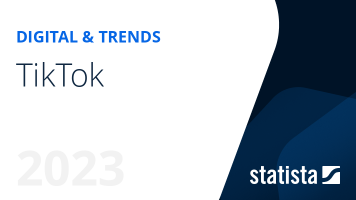 The most important key figures provide you with a compact summary of the topic of "TikTok" and take you straight to the corresponding statistics.