The United States overall produced the most municipal solid waste of any country in the World Bank’s database. Overall, the U.S. created nearly 258 million tons of MSW per year. Daily each person in the United States creates around 4.4 pounds of municipal waste.

Iceland generated around 525,000 tons of municipal solid waste annually. In the aggregate, that is much less than the U.S. Despite this, Iceland produced more MSW per person than the U.S. Each person in Iceland created about 8.9 pounds of MSW daily.

Municipal solid waste only makes up about 5 percent of all waste a country produces. Most garbage a country generates comes from construction and agriculture, so these numbers only represent a fraction of the total trash in each country.

The amount of trash is set to rise as the population grows. Between 2016 and 2050, waste is expected to increase by as much as 70 percent, according to the World Bank. 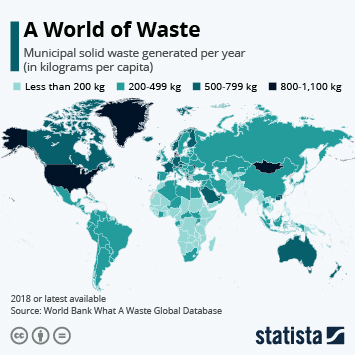 This chart shows the pounds of municipal solid waste generated per capita in each country, daily.