On a night where foreign policy and social issues were some of the main topics discussed, Massachusetts Senator Elizabeth Warren spoke the most words. According to debate transcripts cited by Bloomberg, Warren spoke 2,400 words at the fifth Democratic debate in Atlanta on November 20.

She beat former Vice President Joe Biden and South Bend, Indiana, Mayor Pete Buttigieg by 100 words. Buttigieg partly earned more talking time because he needed to defend himself against California Senator Kamala Harris, Minnesota Senator Amy Klobuchar and Hawaii Representative Tulsi Gabbard, who all attacked him for his lack of experience and struggle to get support from the black community.

Though Vermont Senator Bernie Sanders is one of the most popular candidates, he uttered fewer words than most. When he was called on to talk about Medicare, he lamented, “Thank you. I wrote the damn bill.” At that point in the debate, Warren had already been asked to speak numerous times.

At the bottom of the pack with a word count of 1,300 were Gabbard, Tom Steyer and Andrew Yang. Steyer and Yang, two of the underdogs in the race, even helped each other, with Steyer thanking Yang after he defended him.

Harris, who spoke 1,900 words, took the opportunity to speak about paid family leave and gender equality. New Jersey Senator Cory Booker, who hadn’t yet qualified for the sixth debate, challenged Biden on opposing the legalization of marijuana on the federal level.

The debate was relatively polite. The candidates were keen to talk about how to defeat President Donald Trump instead of criticizing each other. 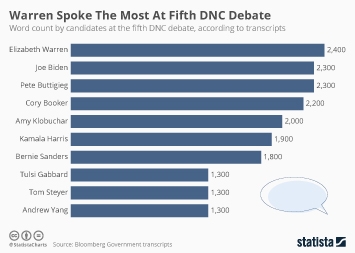 This chart shows the word count by candidates at the fifth DNC debate, according to transcripts.