After a year that redefined the Southern U.S. Borders in terms of immigrant arrivals and another one subdued by the coronavirus pandemic, 2021 has once again seen apprehensions of undocumented migrants soar. Like in 2019, the number of families, typically from Central America, and unaccompanied minors has been elevated. After reaching a high in March, numbers dipped, but remained at a high level in April and May.

As for family units, numbers took a similar dip to around 41,000 apprehensions after a high of around 53,000 individuals in family units (adults and children) were detained in March.

While a steady increase of families arriving at the Southern U.S. border happened throughout the 2010s (the number of minors arriving by themselves fluctuated), 2019 saw an unprecedented surge of parents and children apprehended at the border. In the peak month of April, almost 85,000 people were stopped as parts of family units. For comparison, the previous record for a whole year had been 107,000 for fiscal year 2018. More than 450,000 parents and children ended up being apprehended together in FY 2019.

Under the Trump administration, children were often separated from their parents when in Border Protection custody. In July 2019, the number of children in detention was put at 2,000 on any given day (not including children detained by internal U.S. immigration enforcement unit ICE). The UN on July 8, 2019, said that it was “appalled” by the condition in which children were detained by U.S. authorities. While the detention of undocumented immigrants, including unaccompanied children, continues under Biden, children are no longer separated from their parents if traveling together. 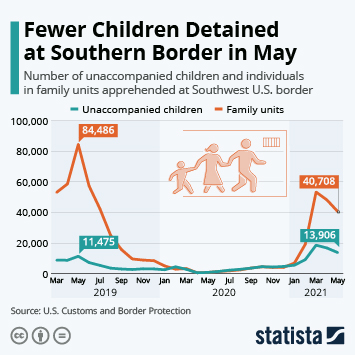 This chart shows monthly number of children and individuals in family units detained at the U.S.-Mexico border in FY19/20/21.