President Joe Biden said on Saturday that families separated at the border under Trump-era policies deserved monetary compensation. The now defunct program mandated that adults illegally crossing into the U.S. were jailed, which meant that those traveling with their children were separated from them. The immigration jail and housing system being a federal one, many families found themselves far apart when released, making reunions difficult. The Trump administration touted the approach as a zero-tolerance policy intended to deter undocumented families coming to the United States.

As seen in numbers by U.S. Customs and Border Protection, the year 2019 saw a spike in undocumented migrants apprehended at the Southern U.S. border, caused by arrivals from Central America. The fact that these migrants often travel in family units gave rise to the Trump-era policy. The pandemic year of 2020 put a sudden stop to migration movements, while 2021 border apprehensions hit an all-time high of 1.66 million, likely also because of catch-up effects.

The inflow of undocumented immigrants from Central America again drove numbers up significantly, but immigration from Mexico has also increased again for the fourth year in a row - together creating another exceptional year at the Southern border.

Historically, immigrants from Mexico made up the largest share of undocumented arrivals to the United States. The arrivals were mostly classified as work migrants, i.e. men arriving without their families at least initially. In the year 2000, Customs and Border Protection data shows that more than 1.64 million people - mostly Mexicans - were arrested at the border - the former all-time high. This number reached a low of 128,000 in FY2017, before rising again to 500,000 in 2021. Immigration from Mexico started to decrease during the Great Recession as work was in short supply. Reasons for this include the economy in Mexico doing better while the country shifts towards an aging population, which causes workers to be more sought after. While this development already flipped again in 2018, the coronavirus pandemic seems to have accelerated the shift as more single adults attempt to leave Mexico for the United States once more.

The number of non-Mexicans apprehended at the border exceeded one million in 2021. Out of these, around 80 percent came from El Salvador, Guatemala and Honduras. People from these countries mostly leave their homes because of the fear of violence and persecution, often taking their families with them. 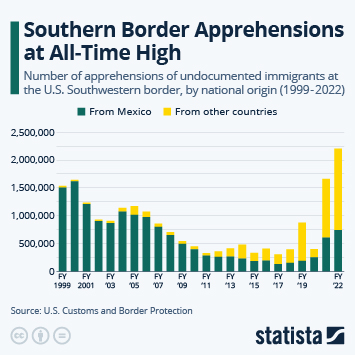 This chart shows the number of Mexicans and migrants from other countries apprehended at the Southern U.S. border between 1999 and 2021.