At its annual Connect Conference, Facebook Inc. announced its name change to Meta Inc. The parent company of Facebook, Instagram and WhatsApp was renamed in correspondence with the Zuckerberg empire's latest plight to create the metaverse, an envisioned virtual reality world that, according to the company, "will feel like a hybrid of today’s online social experiences, sometimes expanded into three dimensions or projected into the physical world." The company has been growing its presence in virtual reality after acquiring headset maker Oculus in 2014. The recent release of the successful Oculus Quest 2 headset translated into a share of three quarters of the XR headset market in Q4 of 2020 and Q1 of 2021, according to Counterpoint Research.

Until the metaverse becomes a reality, the focus will stay on the company's prolific social media platforms, however. Across its family of apps, Meta Inc. now has 3.6 billion “monthly active people”, which it defines as “as a registered and logged-in user of Facebook, Instagram, Messenger, and/or WhatsApp who visited at least one of these Family products through a mobile device application or using a web or mobile browser in the last 30 days as of the date of measurement.”

The company started reporting the family products metric in 2019 and hasn’t publicly shared new user data for Messenger or Instagram since 2017 and 2018, respectively. The last official release for WhatsApp happened in Q1 of 2020, when the platform hit two billion users. Based on Instagram advertising data released in July, the number of Instagram's monthly active users could be closer to 1.4 billion at the moment.

The following chart shows the latest available information on how many people use each of Meta’s social networking/messaging tools, with the company’s former namesake platform still the undisputed number one in terms of monthly active users. 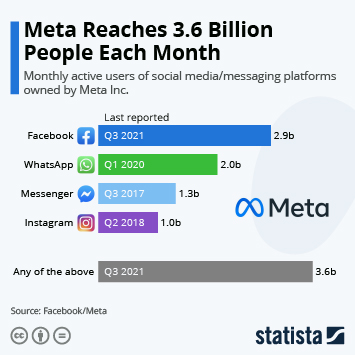