Earlier this week, Nike announced the departure of Ann Hebert, VP and general manager of the company’s North America business, just days after Bloomberg Businessweek had published a story centered around her son’s sneaker resale business. While working on the article portraying Joe Hebert and his company West Coast Streetwear, the author had accidentally discovered the connection between Joe and his Nike exec mum, unveiling that he had used a credit card in her name to buy thousands of dollars’ worth of sneakers in order to resell them at a profit. While Ann Hebert apparently disclosed information about her son’s business to Nike in 2018 and no violation of company policy was found, it’s hard not to make a connection between her departure and Bloomberg’s revelations.

Over the past few years, the secondary sneaker market has grown into a beast of its own, with StockX, a leading resale platform rumored to go public this year, projecting the secondary market to grow to 15-25 percent of the $100 billion sneaker market by 2025. Capitalizing on the relatively young practice of selling limited edition sneakers in online raffles, professional resellers like Joe Hebert try to cheat the system, using bots to buy up sought-after sneakers (think Air Jordans), only to sell them at a premium on platforms such as StockX.

As the following chart shows, StockX’s gross merchandise volume exceeded $1 billion for the first time in 2019, before climbing to $1.8 billion last year. While that includes other products, such as designer clothes or handbags, it’s safe to assume that sneakers account for the lion’s share of the 7.5 million trades that were processed on the platform in 2020. Nike Jordans were the most popular shoes on the platform in terms of total trades, landing an average premium of 54 percent above the original retail price.

While reselling is frowned upon by many sneakerheads, many have resigned to buying on the secondary market as well, as it is often the only remaining option to get their hands on a coveted pair of shoes. And while brands are officially dismissive of reselling as well, they also willingly benefit from the aura of exclusivity given to shoes reselling for hundreds, if not thousands of dollars. 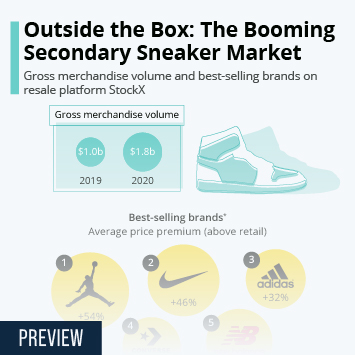 This chart shows gross merchandise volume and the most popular sneaker brands on resale platform StockX.