Shoes, clothing, handbags, electronics: While trading items infringing on international intellectual property laws is illegal, the corresponding market has been bustling over the last couple of years. According to data from the Global Trade in Fakes report by the OECD and EUIPO, trading with counterfeit goods amounted to roughly $449 billion in 2019. As our chart comparing this amount to 2019 GDP figures of selected OECD countries and regions shows, selling fake sneakers, watches and clothes is about as lucrative as running a mid-sized European country.

For example, Ireland's economy generated approximately $431 billion according to OECD data, while Portugal claimed seventh place among the organization's member states with $372 billion. Interestingly, the market size of the trade with fake goods is also in roughly the same ballpark as Hong Kong's GDP of $466 billion, which is itself responsible for around 20 percent of the value of seized items between 2017 and 2019.

In that period, the former and China combined for almost 80 percent of volume and around 90 percent of value of the trade with fakes. Turkey, Singapore and the United Arab Emirates placed third, fourth and fifth in terms of value, respectively, while Turkey stood out due to its contribution of roughly 10 percent to the total volume of seized goods. The authors of the report go on to note that this doesn't necessarily mean that the fakes originated in these economies, but rather that these states also could have served as a point of transit for said items.

According to the publication, the trade with counterfeit or pirated goods made up 2.5 percent of the world trade and roughly six percent of imports into the European Union in 2019. Even though the report doesn't give concrete numbers, the global pandemic also impacted this specific market, with border closings and limited production capacities leading to an increased influx of counterfeit pharmaceuticals and personal protective equipment like masks, gloves and sanitizers. 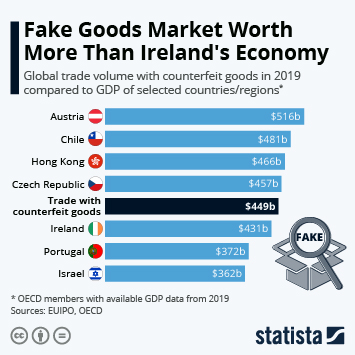 This chart shows the global trade volume with counterfeit goods compared to GDP of selected countries/regions.