In light of rising case numbers and a significant slowdown in the U.S. vaccine rollout, leading health experts in the United States are once again ringing the alarm bells, urging the population to remain vigilant and get vaccinated if possible.

On Thursday, the director of the Centers for Disease Control and Prevention, Dr. Rochelle P. Walensky, warned that the country was “not out of the woods yet,” describing the current situation as another “pivotal moment” in the pandemic. “The Delta variant is spreading with incredible efficiency and now represents more than 83 percent of the virus circulating in the United States. Compared to the virus we had circulating initially in the United States at the start of the pandemic, the Delta variant is more aggressive and much more transmissible than previously circulating strains. It is one of the most infectious respiratory viruses we know of and that I have seen in my 20-year career,” Walensky said at a White House press briefing.

On Sunday, Dr. Anthony S. Fauci, President Biden’s chief medical adviser, reiterated Walensky’s warnings, saying that the country is currently heading in the wrong direction. “It is really a pandemic among the unvaccinated,” Fauci said with respect to rising new infections across the country, “which is the reason why we're out there, practically pleading with the unvaccinated people to go out and get vaccinated.”

As the following chart, based on CDC data compiled by Our World in Data, illustrates, the U.S. vaccine rollout has slowed to a crawl in recent weeks, with the seven-day average of daily doses administered currently at the lowest level since early January, when vaccine supply was still heavily constrained. With roughly 50 percent of the population fully vaccinated and experts estimating a required vaccination rate of around 80 percent to achieve herd immunity, the slowdown comes too early to achieve that goal in the foreseeable future, making a fifth wave of COVID-19 look almost inevitable at this point. 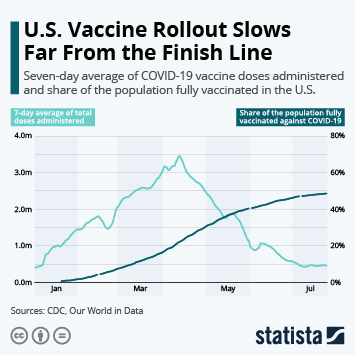 This chart shows the seven-day average of COVID-19 vaccine doses administered in the United States.