87 percent of 24 dating apps reviewed by the Mozilla Foundation have severe issues when it comes to protecting their users' privacy, with only Lex, eHarmony and Happn passing the test. This is the result of a yearly study by the non-profit founded in 2003, which analyzed privacy policies, company websites, news reports, research whitepapers, app store listings and consumer reviews of 196 popular products from segments like wearables, connected health devices or entertainment. As our chart shows, the biggest offenders can not only be found on your phone but also next to your couch and in your children's rooms.

When it comes to smart toys for children, for example, the non-profit categorized a market-and-kitchen playset by KidKraft as questionable when it comes to privacy, since its Alexa integration and corresponding skill don't have separate privacy policies. Other offenders from this segment include Amazon's smart display Echo Show for Kids and drones by DJI and Ryze. The entertainment category featuring video game consoles, tablets, streaming sticks and e-book readers contained nine products not passing the bar set by Mozilla Foundation's analysts, including Meta's Oculus Quest 2 and Amazon's range of Fire tablets. Surprisingly, in the smart home category, which includes smart thermostats, fridges, doorbells and locks and has faced scrutiny for its approach to home surveillance, only 18 percent or eight of the 45 products tested were deemed a safety risk. According to Mozilla Foundation experts, Amazon Ring doorbells and cameras as well as Meta's and Amazon's smart displays and Echo Show Portal pose a significant threat to the safety of their users' data.

However, the report isn't all doom and gloom. The non-profit also identified 21 products taking security and privacy seriously. Among those are video call and chat apps Threema and Signal, select fitness trackers by Garmin, smart speakers by Apple and Sonos as well as iRobot's coding robot for kids Root and robot vacuum Roomba. Keeping users' data safe will be one of the biggest issues in the field of the Internet of Things (IoT) in the years to come. According to Statista Research Department estimates, 7.7 million consumer IoT devices were in use in 2019 already. By 2024, this number is projected to double to 14 million devices. 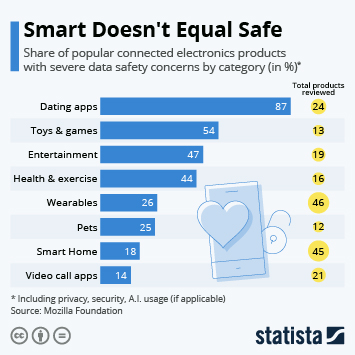