Regarding Facebook, one question showed why people are leaving the platform in 2020. When asked about their top reasons for not using Facebook, 46 percent of respondents listed privacy concerns as their main motivation for ditching the social media platform.

According to The Verge, Facebook’s U.S. user base has declined by more than 15 million since 2017. People are flocking to Instagram and WhatsApp, however, which are both owned by the Facebook corporation.

Other Facebook questions in the survey asked people whether Facebook has too much power, where 72 percent of respondents agreed that the company did have too much power. Still, 66 percent agreed it’s okay Instagram and WhatsApp are owned by Facebook.

Among which tech companies Americans trust the most with their information, Microsoft and Amazon came out on top with 75 percent and 73 percent of respondents’ trust, respectively. Facebook came in last with only 41 percent. 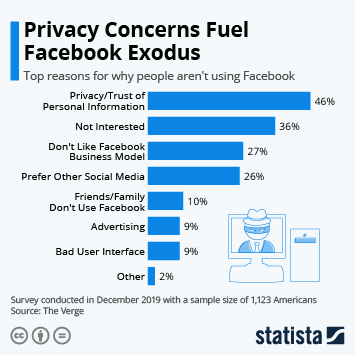 This chart shows the top reasons for why people aren't using Facebook.