Shares of Tesla, Rivian and other electric car makers surged on Monday after Senate passed the Inflation Reduction Act on Sunday, which injects nearly $370 billion into the clean energy sector. In a broad effort to slash greenhouse gas emissions significantly by 2030, the bill includes tax breaks and other incentives aimed to steer consumers towards electric vehicles and to spur investment in renewable energy.

In order to accelerate the transition to electric vehicles, the bill offers a tax credit of up to $7,500 for buyers of new electric vehicles and of up to $4,000 for used EVs. To be more exact, the bill extends the existing tax credit and, most importantly, eliminates a cap that limits eligibility to 200,000 vehicles per manufacturer. Popular electric car makers such as Tesla and General Motors had already reached their quota, effectively making their cars less affordable compared to the competition.

As the following chart shows, affordability is still a major hurdle for many potential buyers of electric vehicles. According to estimates from Kelley Blue Book, new electric cars sold for an average of almost $67,000 in June, an investment that is out of reach for many middle-class Americans. Including income and price limits for the incentives, the new legislation is clearly trying to drive EV adoption among middle-class buyers, whereas the bulk of electric vehicles sold today are positioned more towards the luxury segment. 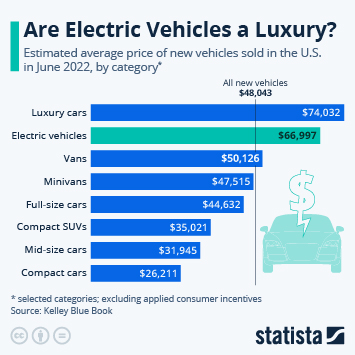 This chart shows the estimated average price of new cars sold in the U.S. in June 2022, by category.