While cloud gaming is seen as one of the most promising developments in how people consume video games due to the removal of expensive hardware from the equation, playing blockbuster games on devices lacking the necessary processing power via so-called remote play has long been a feature of various consoles and PC storefronts.

Even though the feature was rarely implemented, Playstation 3 games could, for example, be streamed to the far less powerful handheld Playstation Portable via wi-fi as early as 2006, while select Playstation 4 games were streamable to specific smartphones starting in 2014 and to Windows and macOS from 2016 onward. As our chart based on our Statista Global Consumer Survey Special: Gaming & eSports shows, this feature is only used by a minority of gamers these days, with two notable exceptions.

54 percent of respondents in Brazil, for example, said they stream games from their PCs or consoles to their smartphones, tablets or similar devices. Roughly half of the survey participants in China, the number one market for video games in terms of revenue, claimed they use another device to play games. Respondents from South Korea, the United States and Germany, the countries claiming the fourth, second and fifth spots concerning gaming market size, are less likely to switch from their primary device to a secondary one. In Germany, only one quarter of the people surveyed claimed to use remote play functionality, while in the United States, roughly a third of respondents said they stream their games from their PCs or consoles to other devices. A common use case for remote play would be the simultaneous usage of a TV as one screen and the connected console and a device like a smartphone as a second one, creating a variation of the second screen phenomenon.

While remote play can't strictly be considered mobile gaming, the importance of smartphones for the gaming industry can't be understated. The segment is expected to be the main revenue driver for the video game market in the years to come. According to estimates by the gaming analysts at Newzoo, the total revenue generated with video games will hit $197 billion in 2022, with $104 billion coming from mobile games. 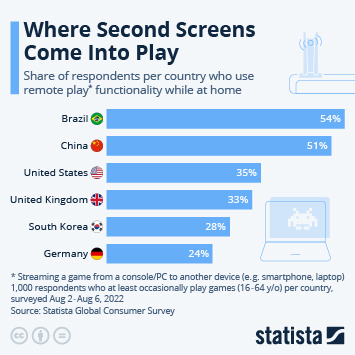