Published by L. Ceci, Jul 12, 2021
Due to the omnipresence of mobile devices in modern life, it is no surprise that media consumption has become increasingly multi-layered with many consumers using an additional screen for secondary activities while watching TV. Second screen usage is especially popular among younger generations but older multitasking second screen users are catching up - in 2016, there were 46.7 million adult related-content simultaneous internet and TV users in the United States. This figure is projected to increase to 54.2 million users in 2018. In 2016, an estimated 68 percent of internet users in the United States accessed their the internet via smartphone and TV simultaneously, the most popular second screen usage combination ahead of desktop/TV and tablet/TV usage.
Shopping, leisure time and while watching TV are the most popular activities for second screen users to access their mobile phone with simultaneously. As of January 2019 the one of the most popular activities undertaken by smartphone users while watching TV was to look up information on actors, plotlines, athletes or teams - 68 percent of responding second screen users stated looking up related content during TV consumption. Emailing or social media usage were ranked first and second with a 76 and 71 percent usage rate respectively. Second screen tablet activities rank the same, with e-mail, social and looking up related information claiming the top three spots.

Reasons for using a second screen are often social and usually in relation to the program on the main screen. Live tweeting or live blogging TV events are popular aspects of second screen usage. The most social television series in 2018 was The Bachelor on AMC with an average of 611,00 combined social media actions per episode. A significant portion of online adults in the United States post on social media before, during, and after a TV program. As of April 2018, 43 percent of Millennials stated that they always or frequently tweeted about or read tweets about a TV program. Also, 72 percent of TV superfans state that a social platform like Twitter played an important role in their TV viewing.

As many highly engaged online users tweet while watching cultural events on television, social second screen usage during events has become a huge marketing opportunity for brands. Social media marketing has subsequently become more time-sensitive. The leading brands in the United States on Twitter in 2017, based on user engagement, include Bleacher Report, Fox News, and SportsCenter.

In the following 5 chapters, you will quickly find the 38 most important statistics relating to "Second screen usage".

The most important key figures provide you with a compact summary of the topic of "Second screen usage" and take you straight to the corresponding statistics. 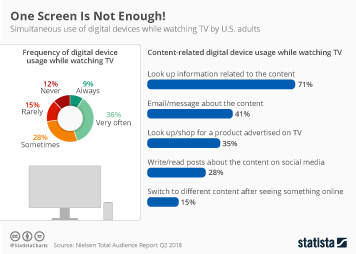