40k
57k
41k
9.6k
In the past 25 years political extremists have on average killed more people in the U.S. than those claiming to kill in the name of God. That’s the bottom-line conclusion of a recent report by the National Consortium for the Study of Terrorism and Responses to Terrorism (START). The report analyzes homicides committed by either Al-Qaeda and affiliated movements (AQAM) or far-right extremists (FRE).

However, the report omits the 9/11 terrorist attacks (3,000 deaths) and the Oklahoma City bombing (168 killed). “The purpose […] is not to discount the victims of these events, but to examine ideological victimization without the disproportionate impact of such catastrophic acts of terrorism”, the report points out.

When counting both incidents in, religious perpetrators have killed nearly 7.5 times more people than far-right extremists. Without these statistical outliers, there are nearly four times as many FRE victims than AQAM victims.

Between 1990 and 2014, AQAM offenders killed 62 people in 38 incidents (1.6 victims per homicide incident) and 245 individuals were killed by FRE offenders in 177 incidents (1.4 victims per homicide incident). It is also worth noting that: “For the AQAM victims, only slightly more than 16 percent were killed prior to the year 2000, compared to slightly more than 45 percent of FRE victims.”

FRE victims were more often purposefully targeted for ideological reasons than AQAM victims (43.3% to 19.4 percent, respectively). This hints at the circumstance that many far-right perpetrators attacked victims they knew of. Also, both extremist groups in many cases chose their victims not for who they were, but what they represented (AQAM, 37.1 and FRE, 38 percent). Surprisingly, the single biggest group of victims of far-right extremists were whites. 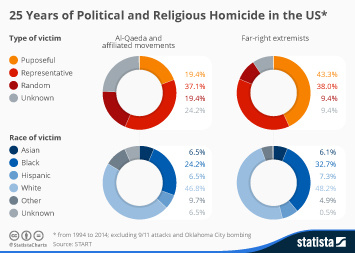 Who are the victims of political and religious extremism in the U.S.

Microsoft in talks to buy TikTok