"Just setting up my twttr" – those were the words that Jack Dorsey, founder and CEO of Twitter, tweeted on March 21, 2006, fifteen years ago this Sunday. Twitter, with its simplicity and unique 140-character limit (which has since been doubled), hit a nerve and quickly gained a following among the tech- and media-savvy. In 2011, Twitter passed the 100-million user milestone and in late 2013 the company went public to huge fanfare.

Everything was well in the Twitter universe, but soon after the company’s successful IPO, the sentiment turned sour. Twitter’s user growth was tapering off quickly and the company kept bleeding money. In 2015, Twitter’s share price began to tumble as people realized that the platform would not emulate Facebook's success in becoming a social network for the masses, which, to be fair, it never set out to be.

When Facebook celebrated its 15th anniversary a little more than two years ago, the company was at another level from Twitter's current status in almost every aspect. Our chart compares 15-year-old Twitter to 15-year-old Facebook in terms of active user base, revenue, profit and market capitalization.

Following a long stock market slump, investors now appear to have accepted that Twitter is not and will never be another Facebook. Instead the platform is aiming to be the go-to source for live commentary and discussions on sporting events, breaking news stories and entertainment. Twitter's shares are currently trading near record levels, up nearly 400 percent from its May 2016 low. 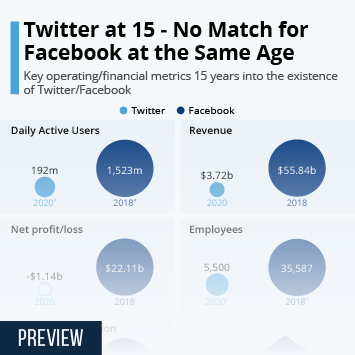 This chart compares 15-year-old Twitter with 15-year-old Facebook with respect to active user base, revenue, profit and market capitalization.