88.9k
When people think of Amazon, they think of e-commerce, of books, maybe of music and video streaming. What most people don’t think of is the hidden business that fuels (and finances) many of Amazon’s more prominent activities. Amazon Web Services (AWS), the company’s cloud infrastructure business catering to other enterprises, has quickly grown from a smaller side business to a billion-dollar success and the main driver of Amazon’s profit. In Q4 2018, Amazon’s cloud arm generated $7.4 billion in revenue and accounted for nearly 60 percent of the company’s $3.8 billion operating profit.

According to Amazon’s CFO Brian Olsavsky, AWS caters to a “very balanced group” of customers, from startups to small businesses, large enterprises and the public sector. Among them are global players such as Netflix, Samsung, BMW, Spotify and NASA. 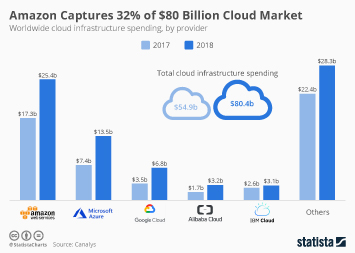 GAFAM 18 months into the pandemic