53k
74.6k
87k
88.9k
According to a forecast from the National Retail Federation, the average American was set to spend $134.75 on Father's Day yesterday, $15.8 billion in total. That level of spending is certainly proof that Americans take Father's Day seriously. Despite all the love, spoiling and splurging, a new U.S. father will actually get to spend far less time connecting with his son or daughter than fathers in other countries. The U.S. is well known for having a complete lack of paid maternity leave for new mothers (the only country in the world along with Papua New Guinea), and fathers also have to deal with zero time off following the birth of their child.

In the majority of developed nations, more and more men are starting to bid farewell to their colleagues and prioritize their new child over work. Indeed, the OECD says that men's use of parental leave is rising, though the portion actually taking it varies heavily between different countries. In Australia, the Czech Republic and Poland, one in fifty fathers take the time off while in Nordic countries, 40 percent take leave. In Finland alone, the share of fathers taking paid leave has doubled between 2006 and 2013.

Out of all OECD countries, South Korea offers its dads the longest parental leave at 53 weeks, slightly ahead of Japan's 52 weeks. Despite that generous allowance, very few fathers in both countries take advantage of it as they fear the career implications. Nevertheless, men accounted for 4.5 percent of leave takers in South Korea in 2014, a three-fold increase on 2007. The U.S. is one of 9 OECD countries with no paid parental leave for fathers. 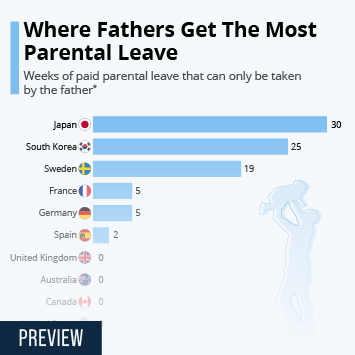 This chart shows weeks of paid parental leave that can only be taken by the father.