A family in the United States consists of 3.15 people on average. Families are defined by the U.S. Census Bureau as a group of two or more people residing together related by birth, marriage, or adoption. There are 83.7 million families in the United States. In around 50 million families, there are no children under the age of 18, whereas about seven million have three or more children living in the household. The number of families with no children has increased over the last two decades, whereas large households stayed about the same.

Children lived in about half of American families in the 1970s, while nowadays families with children represent a much lower amount. This reflects the steady decline of the birth rate in the United States. In the 1960s and 1970s, a woman in the United States had about 2.5 babies on average. In 2020, the birth rate reached 1.9 children per woman. A similar tendency can be observed worldwide. The global fertility rate dropped from five children per woman in 1950, to 2.5 in 2020. African countries have the highest birth rate in the world. Nevertheless, this has been decreasing since last century.

In 2015, under the Obama administration, same-sex marriage was legalized in all 50 states. As of 2019, there were more than half a million married same sex couples, while another 400,000 were living together. In total, there are roughly 62 million married couples in the United States. Nevada has the highest marriage rate among all states. Nevada is the only U.S. state where it is possible to get a marriage license and immediately get married, which might explain the higher rate. Overall, the number of married people in the United States has increased over the last decades. However, this is due to the rising population. The marriage rate, in fact, dropped by about three marriages per 1,000 of the population in the last 30 years.
This text provides general information. Statista assumes no liability for the information given being complete or correct. Due to varying update cycles, statistics can display more up-to-date data than referenced in the text.
Published by Statista Research Department, Nov 9, 2022

Number of U.S. families with a single mother
15.62m 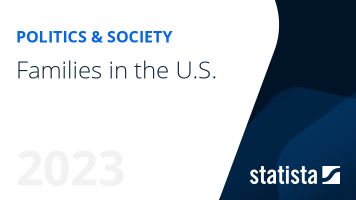 Go to report Families in the United States
Top Seller

The most important key figures provide you with a compact summary of the topic of "Families in the United States" and take you straight to the corresponding statistics.