Published by Statista Research Department, Mar 28, 2022
The unemployment rate in the United Kingdom was 3.9 percent in January 2022, one of the lowest rates of unemployment recorded since 1974. Overall, this meant that there were approximately 1.34 million people that were unemployed as of this month, almost half the number that were out of work in 2011, following the global financial crisis. Although there was a temporary uptick in unemployment in the aftermath of the COVID-19 pandemic, which saw the unemployment rate peak at 5.1 percent in late 2020, this was lower than was initially feared when the pandemic started. Between April 2020 and October 2021 the job retention scheme, had approximately 11.7 million jobs on furlough, and was likely one of the main reasons unemployment was not much higher during this time. Unemployment is also expected to remain low for the near future, with a forecasted annual unemployment rate of four percent for 2022, and 4.2 percent for 2023.

Demographics of the unemployed

As of January 2022, most people who were unemployed, had only been out of work for six months or less, with just 406,000 unemployed for more than a year. This is a significant decrease when compared with May 2013 when 919,000 people were long-term unemployed. Unemployment is also not something which is experienced the same across the UK, with the regional unemployment rate of the United Kingdom varying from 5.5 percent in the North East of England to just 2.7 percent in Northern Ireland. In London, the UK capital, the unemployment rate was just above the national average at five percent, with London's unemployment rate also reaching quite high levels a year previously, at 7.4 percent.

In the following 5 chapters, you will quickly find the 29 most important statistics relating to "Unemployment in the UK".

The most important key figures provide you with a compact summary of the topic of "Unemployment in the UK" and take you straight to the corresponding statistics. 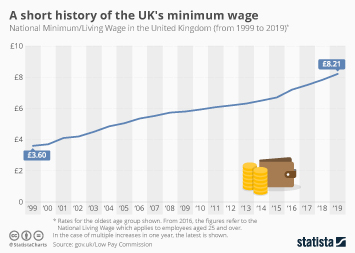 A short history of the UK's minimum wage 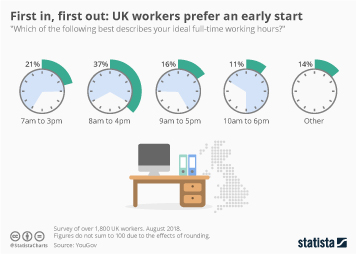 First in, first out: UK workers prefer an early start