Published by C. Textor, Jun 1, 2022
China’s huge labor force was one of the most important factors contributing to the country’s unparalleled economic development over the past decades. Initially benefitting from its ample supply of cheap labor from the countryside, China’s demography and labor dynamics are now changing, putting strains on the economic development.

With about 1.41 billion people, China was the most populous country in the world in 2021. However, the Chinese population is aging at a high pace and population growth is projected to reach a turning point sometime in the 2020s. The working-age population in China reached this turning point already in 2014 and a general downtrend for the size of the labor force is inevitable in the coming years. Hence, efforts to rise productivity levels will become even more crucial for economic growth in the future.

During the early years of the PRC, strong political emphasis was placed on agriculture. Following the implementation of economic growth schemes, more importance was placed on industrial labor during the 1990s and 2000s. With the ongoing transformation of the Chinese economy towards a more service oriented industry, employment in the service sector underwent a considerable expansion over the past years and accounted for more than 47 percent of the labor force in China in 2020. This general shift led to the creation of better paid jobs in the cities and urban regions, which in turn induced a massive stream of migrant workers seeking employment in urban areas of China. According to the Chinese government, the number of migrant workers reached nearly 293 million in 2021. The female proportion of migrant workers amounted to 36 percent in 2021.

The ever growing demand for qualified personnel fueled the urban labor market. The average annual salary in China’s urban regions increased to around 106,800 yuan as at the end of 2021. That being said, wage gaps between different regions were still relatively large. While the average annual salary in Beijing reached approximately 178,200 yuan in 2020, it ranged at only about 70,200 yuan in Henan province for the corresponding period. Even larger salary gaps were recorded between different employment sectors, with highest wages being paid in the IT sector, scientific research, and financial industries.

In the following 5 chapters, you will quickly find the 33 most important statistics relating to "Employment in China".

The most important key figures provide you with a compact summary of the topic of "Employment in China" and take you straight to the corresponding statistics. 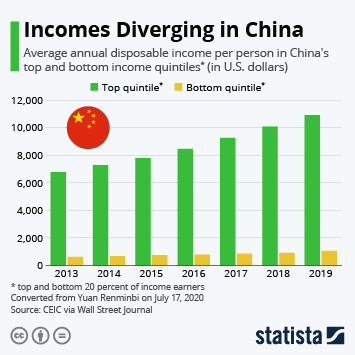 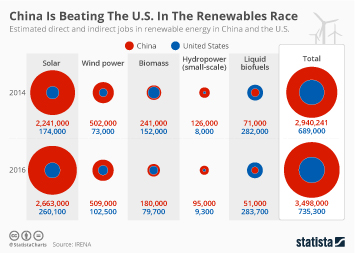 China Is Beating The U.S. In The Renewables Race