LG Electronics, a part of the LG Corporation, is a multinational electronics company headquartered in Seoul, South Korea. South Korean businessman Koo In-Hwoi founded the company, then known as Goldstar, in 1958. The company changed its name to LG Electronics after a merger with Lucky Chemical in 1995. LG is considered one of the leading consumer electronics companies in the world with around 67.25 billion U.S. dollars in global revenue as of 2021. South Korea, North America, Europe, and other parts of Asia make up the company’s most important markets, with close to 85 percent of total revenue coming from these regions.

The company is currently comprised of several operating segments including Home Appliance & Air Solution, Home Entertainment, Vehicle Component Solutions, Business Solutions, as well as LG Innotek and subsidiaries. LG’s Home Appliance & Air Solution segment alone generated over 24 billion U.S. dollars in revenue in 2021, making it LG’s largest business segment, followed by Home Entertainment, which brought in over 15 billion U.S. dollars in revenue in 2021. LG Electronics has maintained its position as one of the largest TV manufacturers, occupying around 16 percent of the market. By contrast, despite the 24.7 million smartphone units sold in 2020, in April 2021, LG officially confirmed that it will no longer engage in the smartphone market.

LG electronics has many rivals in the consumer electronics market, including the likes of Apple, Sony, and Panasonic. Samsung Electronics is one of LG’s biggest competitors, a similar Korean consumer electronics giant which focuses on many of the same products. Both companies have highly competitive product lines across a variety of consumer electronics devices and household appliances, such as refrigerators, washing machines, and air conditioners.
This text provides general information. Statista assumes no liability for the information given being complete or correct. Due to varying update cycles, statistics can display more up-to-date data than referenced in the text. 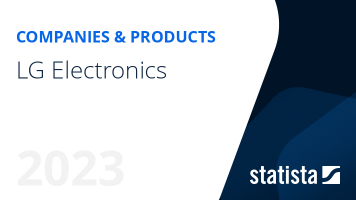 The most important key figures provide you with a compact summary of the topic of "LG Electronics" and take you straight to the corresponding statistics.