Published by
Federica Laricchia,
Apr 5, 2022
Samsung Electronics is a global leader in consumer electronics, semiconductors, telecommunications, and digital media technologies. Headquartered in Suwon, South Korea, the company was founded in 1969, and has since grown into a multinational conglomerate with over 287,000 employees in 74 countries. In 2021, Samsung Electronics generated a revenue of roughly 244 billion US dollars, most of which came from its mobile communication and semiconductor segments.

Samsung is the leading smartphone vendor worldwide. In 2021, Samsung's market share of the global smartphone market was at around 20 percent with Apple and Huawei as its closest competitors. In 2021 alone, the South Korean company sold more than 272 million smartphones worldwide. The Galaxy family is Samsung’s most famous line of smartphone products, with the Galaxy S line being the most prominent. The Galaxy S series is Samsung’s high-end smartphone line and is therefore in direct competition with the Apple iPhone. It has become a consumer favorite over the years, rocking shipments in dozens of millions.

Samsung also holds a sizeable position in the tablet computer market with the Android-powered Samsung Galaxy Tab, ranking behind the Apple iPad. In 2021, Samsung held the leading Android tablet manufacturer position, commanding around 16 percent of the market share in the fourth quarter of 2021. Like the tablet market, the smartwatch market also sees Samsung as the strongest contender to Apple: in 2021, Samsung had a share of around 10 percent compared to Apple’s 30 percent.

A towering presence in the display and semiconductor markets

Apart from enjoying great success in the mobile market, Samsung also has a strong presence in the display, TV, and semiconductors industry. Samsung has been the world's largest television manufacturer since 2008, holding around 31 percent share of the global TV market. The South Korean giant is also the leading semiconductor vendor, having toppled Intel in 2021. The company is particularly strong in memory semiconductors, dominating the global NAND flash memory market with a share of over 30 percent.

In the following 7 chapters, you will quickly find the 35 most important statistics relating to "Samsung Electronics". 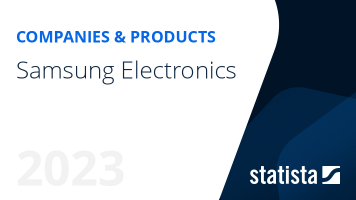 The most important key figures provide you with a compact summary of the topic of "Samsung Electronics" and take you straight to the corresponding statistics. 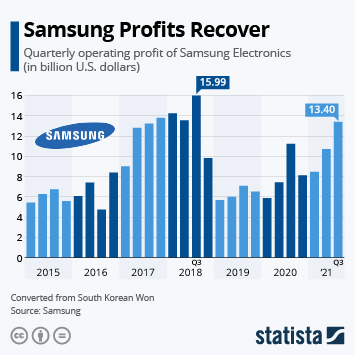 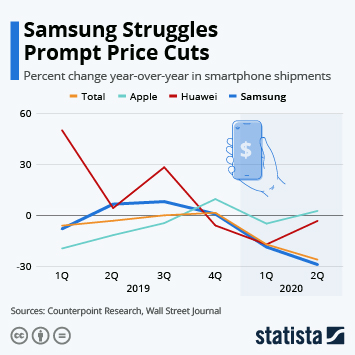