Published by
M. Shahbandeh,
Nov 18, 2022
Beef is the culinary name for meat which comes from cattle. Produced from bulls, heifers or steers, beef is a variety of red meat which may be cut into roasts, steaks or short ribs. Numerous cuts of steak exist, from premium steaks such as rib eye, sirloin, or tenderloin to more budget varieties such as hanger and skirt steak. In 2022, the global production of beef and veal amounted to 58.7 million metric tons.

In 2021, around 1.35 million metric tons of of beef were produced in Canada, and almost 615 thousand metric tons of beef were exported that year. The United States accounted for the largest export market for beef, with an export value of approximately 3.29 billion Canadian dollars. The western province of Alberta accounted for the largest beef cow inventory, with around 1.64 million heads as of January 2022. The average retail price of prime rib roast was 43.16 Canadian dollars in February 2022, an increase from 38.6 Canadian dollars in May of the previous year.

Almost 50 percent of Canadians consume meat or meat containing products daily, but some consumers are cutting back on meat consumption. Leading motives for reducing or stopping beef consumption completely include overall health, the environment, and animal cruelty. The decrease in consumption is reflected in the per capita consumption of beef in Canada. The estimated consumption in 2022 was about 25.7 kilograms per person, over a 33 percent decrease compared to 1980.

In the following 5 chapters, you will quickly find the 30 most important statistics relating to "Beef market in Canada". 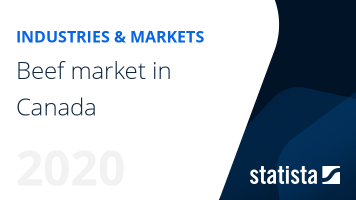 The most important key figures provide you with a compact summary of the topic of "Beef market in Canada" and take you straight to the corresponding statistics.