Published by
T. Ozbun,
Mar 22, 2022
Founded in 1919, Loblaws supermarket is one of the main players in the Canadian supermarket and grocery industry. Loblaws founders, Theodore Pringle Loblaw and J. Milton Cork, were pioneers in the introduction of self-serve and cash-and-carry grocery retailing in Canada. Expanding rapidly, there are now over 2,000 Loblaws stores in Canada. As of 2021, Loblaws generated a revenue of over 53 billion Canadian dollars, leading the ranking of Canadian food retailers in the previous year. Second-place Sobeys had a revenue of just over 28 billion Canadian dollars in that fiscal year.

Loblaw Companies has six independent divisions, including Shoppers Drug Mart, one of the leading pharmacy chains in Canada. Founded in 1962 by pharmacist Murry Koffler, the first Shoppers Drug Mart store revolutionized retail pharmacy by combining mass merchandizing and self-service. Headquartered in North York, Toronto, the pharmacy retailer was acquired by Loblaw Companies in 2014. Annual drug sales for Shoppers Drug Mart in Canada have witnessed a steady increase in recent years. In 2021, front store sales accounted for over half of all Shoppers Drug Mart sales, amounting to approximately 7.6 million Canadian dollars. Front stole sales include traditionally non-pharmacy products, such as food and cosmetics.

In the following 5 chapters, you will quickly find the 30 most important statistics relating to "Loblaws". 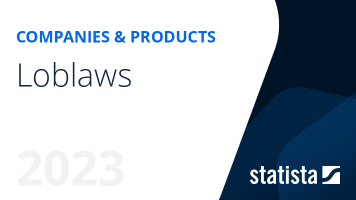 The most important key figures provide you with a compact summary of the topic of "Loblaws" and take you straight to the corresponding statistics.