Published by Statista Research Department, Sep 1, 2022
The term “superfood” has become an often used buzzword in the language of food and health. But due to the lack of scientifically-based evidence of the often praised positive health effects of these products, the actual term is neither legally protected nor officially defined. According to the English Oxford dictionary, a superfood is described as “A nutrient-rich food considered to be especially beneficial for health and well-being”. These foods often have an additional nutritional value (value-added products) in comparison to other food products such as a high fiber, antioxidant, mineral or vitamin content or a desirable fatty acid composition. Producers and marketers of superfoods highlight this extra value in order to market their products. The size of the health and wellness food market has exceeded 841 billion U.S. dollars in 2021. With the growing popularity and expected wider consumer adoption in the next years, superfoods are projected to have a market value of one trillion U.S. dollars by 2026. Foods that are often discussed as being superfoods include ancient grains, chia seeds, pulses, seaweed and kombucha.

Chia seeds are commonly referred to as an ancient grain, but the omega-three fatty-acid-filled food is actually a seed. Popular for being rich with massive amounts of nutrients, the global market value of chia seeds is forecasted to grow nearly ten-fold between 2021 and 2030. Another superfood with growing popularity is quinoa, a protein-rich whole grain crop that is cultivated for its edible seeds, which has become increasingly prevalent particularly for consumers on a plant-based diet. Since much of consumption has shifted towards healthy, nutritious and plant-based alternatives, the market value of quinoa is projected to more than double in the next decade, reaching approximately 149.3 billion U.S. dollars by 2026.

A relatively newly promoted superfood is the vitamin-packed seaweed. It was also to be found as a good source of calcium and iodine. In 2020, the global market for commercial seaweed was valued at 14.1 billion U.S. dollars.
In addition to the food category, the beverage segment also has value-added products such as kombucha to offer. The fermented tea drink has been promoted to have a positive health effect. In 2022, the global kombucha market was estimated at over two billion U.S. dollars.

In the following 5 chapters, you will quickly find the 26 most important statistics relating to "Superfoods". 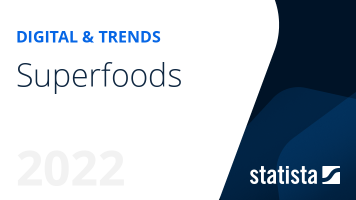 The most important key figures provide you with a compact summary of the topic of "Superfoods" and take you straight to the corresponding statistics.

Food shopping behavior in the U.S.

Healthy dining in the U.S.

Supermarkets in the U.S.