Veganism and vegetarianism in the United States - statistics & facts

In the United States, roughly five percent of the population is vegetarians. This is about the same level as in other Western countries such as Germany. About two percent of the U.S. population follows a vegan diet. It is noteworthy that the number of vegans is so small, that surveys have a hard time clearly showing how many vegans there are. Even slight deviations can result in the share of vegans being halved or doubled. When it comes to the gender split of Generation Z and Millennials, slightly more than 60 percent of U.S. vegetarians are female. Similarly, the share of female vegans in these age groups is around 59 percent.

The leading reasons for consumers to become vegetarians, vegans, or pescatarians are to eat healthier or lose weight, animal welfare concerns, concerns about climate change, and a few others. About 40 percent of consumers in the U.S. adopted the diet due to the desire to eat healthier. When we look at U.S. consumers who only ate less meat, this reason jumps to almost 60 percent. Taking into account that a bit less than half of U.S. adults who eat meatless products think meat substitutes are healthier, the leading driver of growth in substitute sales becomes apparent.

In the following 5 chapters, you will quickly find the 32 most important statistics relating to "Veganism and vegetarianism in the U.S.". 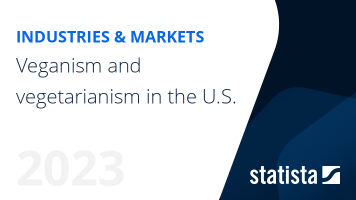 Go to report Veganism and vegetarianism in the U.S.
Top Seller

The most important key figures provide you with a compact summary of the topic of "Veganism and vegetarianism in the U.S." and take you straight to the corresponding statistics. 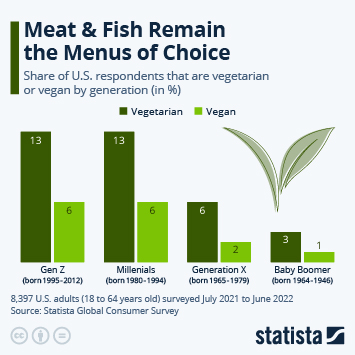 Meat & Fish Are Still on the Menu for Most Americans 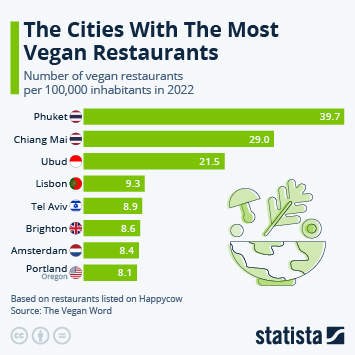 The Cities With The Most Vegan Options Worldwide