Published by
M. Shahbandeh,
Apr 25, 2022
Quinoa, a grain crop which is cultivated for its edible seeds, has been domesticated in South America for thousands of years. The three main producing countries include Peru, Bolivia, and Ecuador. Pronounced "keen-wa", this crop is considered to be a healthier option when compared to starchy grains. It comes in three different varieties: whole grain white, red and black. Due to its favorable characteristics such as being protein-rich, high in vitamins and fiber, and low in fat, the nutritional powerhouse is also known as superfood.

Over the years, the value of global quinoa market had been increasing significantly, surpassing 81 billion U.S. dollars in 2021. Quinoa is almost exclusively grown in South America. In line with the exorbitant increasing quinoa demand from developed countries, the global price saw a tremendous growth from 2010 to 2014. As of December, 2020, a kilogram of quinoa cost around 1.8 U.S. dollars on average worldwide.

Quinoa demand in the U.S.

In the following 5 chapters, you will quickly find the 25 most important statistics relating to "Quinoa market". 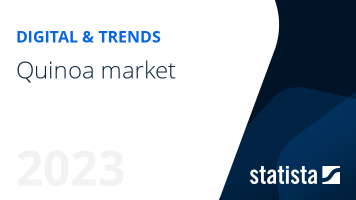 The most important key figures provide you with a compact summary of the topic of "Quinoa market" and take you straight to the corresponding statistics.

Gluten-free foods market in the U.S.