Who are the market leaders?

Some of the largest life insurance companies in the United States by market capitalization include MetLife, American International Group (AIG), and Prudential Financial. In 2021, MetLife generated total revenues worth almost 30 billion U.S. dollars on the domestic market – significantly higher than revenues generated in other regions/segments. In the same year, the net income of American International Group (AIG) reached just over 14.6 billion U.S. dollars. As of 2020, Milwaukee-based Northwestern Mutual had the highest market share of life insurance companies in the U.S.

How has the life insurance industry changed over time?

In the following 5 chapters, you will quickly find the 26 most important statistics relating to "Life insurance in the U.S.". 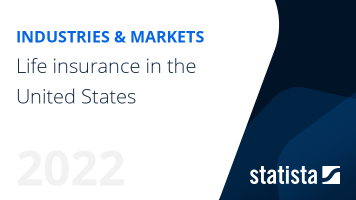 The most important key figures provide you with a compact summary of the topic of "Life insurance in the U.S." and take you straight to the corresponding statistics.