Published by Statista Research Department, Sep 20, 2022
Consumers are constantly seeking new ways to watch television or stream new music as soon as it is released. Some even resort to illegal means to gain access to their favorite movies or shows. Media piracy is especially prevalent in countries such as Indonesia and Egypt, where 16 percent of consumers admitted to pirating content more than once a week as of February 2017.
One of the most popular types of media piracy is video piracy and, in Spain and Canada, over a third of consumers admit to watching pirated content. One of the driving forces behind pirating video content is the consumers’ desire to watch new content as soon as it is released, without having to pay to go to the movie theater or pay for premium television services. The most common method of consuming movies and TV series illegally is streamripping, whilst many consumers also download and stream content illegally .

Since streaming content has become increasingly favored over buying physical content, music streaming and, by extension, music piracy, have also become more widespread. Over half of global internet users aged 16-24 have accessed music through copyright infringement, with the rates highest in Spain and Brazil.

A new piracy market has also emerged in recent years thanks to the rise of the e-reader. Estimates suggest that there are 16.5 million illegal book downloaders in the United States who, by downloading their literature illegally, contribute to a loss of sales of 315 million U.S. dollars. In contrast to music piracy, which mostly remains an activity of the young, book piracy is mostly carried out by those in the 30-44 age category, although the share of illegal book downloaders drops significantly in the older age groups. The reasons for this illegal activity are plain – it is convenient and free. However, others also claim that they are forced into downloading illegal e-books because their preferred books are not available from online retailers. As a result, sites such as 4shared.com and bookos.org continue to thrive as people look for even easier and cheaper ways to access the content they want.

In the following 5 chapters, you will quickly find the 41 most important statistics relating to "Media Piracy".

The most important key figures provide you with a compact summary of the topic of "Media Piracy" and take you straight to the corresponding statistics.

Movie industry in the U.S. & Canada

Book market in the U.S. 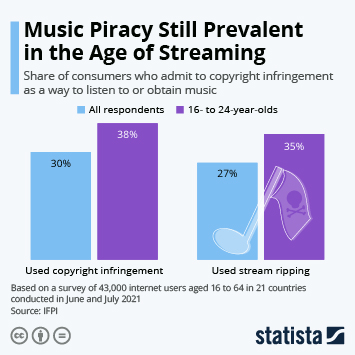 Music Piracy Still Prevalent in the Age of Streaming 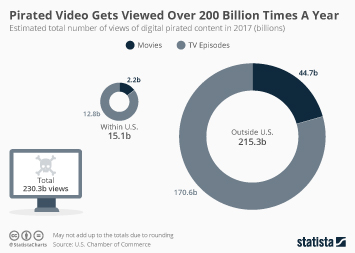 Pirated Video Gets Viewed Over 200 Billion Times A Year