Published by Amy Watson, Jan 16, 2019
While more modern forms of entertainment such as watching television, browsing the internet, and video gaming have all become major pastimes for Americans, traditional forms of entertainment such as reading books or magazines seem to be on the decline. On average, Americans aged 20 to 34 spend a mere 0.11 hours reading daily, which amounts to less than seven minutes per day. Although the time spent reading increases in the older generations, the general trend is worrying – an overall average of only 0.28 hours spent reading per day. Despite these stunning numbers, there are also some positive things to note: As of 2018, 74 percent of adults stated that they have read at least one book in the past year, and additionally, Americans continue to spend around 110 U.S. dollars per year on reading.
One of the main reasons that people choose to spend their precious free-time reading is genuine enjoyment and entertainment. During a recent survey, 98 percent of respondents stated that they read for pleasure, whilst a further 29 percent indicated that they read in order to keep up with current events. The most common form of regular reading materials were novels and fiction books, whilst non-fiction books and newspapers also remain relatively popular. Poetry is one form of literature that hasn’t yet been able to find its place in the mainstream of today’s society, with only 11 percent of respondents stating that they read it on a regular basis.

Perhaps the key way in which reading habits in the U.S. have changed is the medium through which Americans access news. In the age of the internet and instant news alerts, gone are the days when people have to consult their daily print newspaper to follow what is going on in the world. As a result, only 19 percent of people report reading local newspapers often, and a whopping 27 percent state that they don’t read them at all. Those who do read newspaper media, however, remain loyal to print, with 51 percent reading print only, in comparison to five percent who access newspaper media only on the internet.

Similar to newspapers, magazines have experienced waning popularity and generally stagnant print subscription numbers. During a recent survey, 23 percent of online consumers stated that they never read magazines, whilst only five percent stated that they read print magazines daily. While industry numbers may not be at record highs, many magazine companies are taking advantage of the fact that consumers are becoming more and more likely to view content on their phones in digital formats rather than traditional print versions. Monthly digital magazine reach has been growing since 2015, and some magazines have already surpassed their print viewership with mobile web viewership alone.

Overall, the health of reading in the U.S. comes down to the ability of publishers to put content into formats that modern consumers enjoy. Modern consumers certainly aren’t reading-averse, they simply expect content that is available to them at a moments notice.

In the following 4 chapters, you will quickly find the 28 most important statistics relating to "Reading habits in the U.S.".

Statistics on the topic
Average annual expenditure on reading per consumer in the U.S.
92 USD
Share of U.S. adults who have read at least one book in the past year
72%
Average daily time spent reading in the U.S.
16.2 minutes

The most important key figures provide you with a compact summary of the topic of "Reading habits in the U.S." and take you straight to the corresponding statistics. 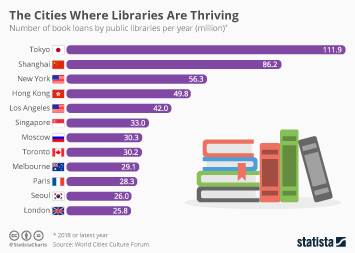