Credit card use in Belgium, Luxembourg and the Netherlands - statistics & facts

Money makes the world go around, and this is also the case in the Benelux region. One preferred way of conducting money transfers in Belgium, Luxembourg and the Netherlands is by card. In 2016, Luxembourg had approximately 216 card payments per capita compared to 151 in Belgium and 232 in the Netherlands. Like in other European countries, credit and debit cards are a popular form of digital payment methods for either physical purchases in brick-and-mortar-stores or for online purchases. One could argue, however, whether credit cards, cards which allow the holder to take short-term loans without the need for calculating their remaining balance before making a transaction, are really used often in the Benelux region.
Compared to most countries in Europe, Belgium is deemed to lag behind when it comes to the implementation of new technologies. An important reason for this is that banking is seen as an important part of Belgian culture with a relatively high number of bank offices in the country. In 2016, for example, the total number of bank offices established in Belgium reached 4,270 in the Flemish region. Despite that, credit cards were the leading payment method for online purchases in Belgium in the first quarter of 2017. Its market share, however, decreased in favor of Bancontact, a payment scheme from Brussels that, like Paypal, is responsible for the processing of electronic payments but specifically targets the Belgian market. Additionally, mobile payment methods appear to be on the rise in Belgium as respondents to a large e-commerce survey indicated an increased use of their bank's app along with PayPal in 2017, compared to 2016.

In Luxembourg, approximately 34 percent of respondents indicated credit cards were their preferred method of payment. In 2016, residents from Luxembourg made approximately 64 billion credit card transactions, both domestic as well as abroad. This is an increase on the 55 billion transactions reached in 2015 and the highest volume reached since 2006. Additionally, credit cards overtook the transaction volume of debit cards for the first time, indicating an increasing popularity in their use. Like Belgium, however, credit cards face domestic competition. In the same survey, respondents listed Digicash, a payments system from Luxembourg finance start-up Digicash Payments, as the third-most-preferred. Its mobile app is used by approximately 25 percent of the Grand Duchy's population. Digicash's success attracted the interest of foreign companies and in August 2017, Belgian mobile-payment company Payconiq announced the acquisition of this service.

In the Netherlands, the total number of credit cards remained roughly the same between 2006 and 2016 at 6.3 million. According to the Dutch Central Bank (DNB), approximately 55 percent of all Dutch consumers have a credit card in his or her possession. The use of debit cards, however, is much more accepted as a payment method. Between 2006 and 2016, Dutch consumers increasingly paid for their purchases by debit card as the volume of debit card payment transactions increased with every passing year. Aided by this growth, it has become the objective of both banks and retailers in the Netherlands to reach a ratio of 60 percent debit card and 40 percent cash payments from consumers by the end of 2018. Leading reasons in the Netherlands for using credit cards domestically include online purchases, hotel reservations and payments in restaurants. Staggered payments, however, are only used by two percent of respondents.

In conclusion, consumers from the Benelux countries are familiar with credit cards and possess them. According to Statista's Digital Market Outlook, a database with data from the IMF, the Worldbank, the United Nations and Eurostat, the credit card penetration rate in Belgium is expected to increase by four percent between 2015 and 2021, whilst ownership in the Netherlands is forecasted to increase by two percent during the same period. Domestic uses, however, appear to be few due to the presence of other popular payment services, with credit cards generally being used for specific situations such as online shopping or foreign travels.
This text provides general information. Statista assumes no liability for the information given being complete or correct. Due to varying update cycles, statistics can display more up-to-date data than referenced in the text.

Total value of card transactions in the Netherlands
135.9bn EUR

Share of cash, debit cards and credit cards in POS in the Netherlands 2010-2020 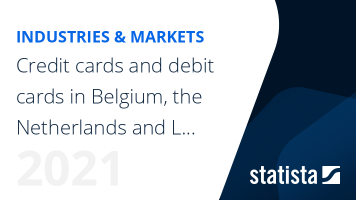 The most important key figures provide you with a compact summary of the topic of "Credit cards in the Benelux" and take you straight to the corresponding statistics.

Level of concern over payment card surveillance in Belgium

Level of concern over payment card surveillance in Luxembourg

Level of concern over payment card surveillance in the Netherlands