What are the most popular payment methods in Europe, by country? This is a difficult question to answer, as many European countries have their own ways of paying money. Visa and Mastercard, for example, were not the leading payment card schemes in every country on the continent. MasterCard had a market share of 95 percent in the Netherlands in 2018, for example, but made up 12 percent of the market in Germany. In Belgium, a domestic solution called Bancontact was significantly more popular than either Visa or Mastercard. This is without considering the ownership of debit cards across Europe, which also varied per country. Whilst 98 percent of Sweden’s adult population indicated they owned a debit card in 2017, this figure was 83 percent for Portuguese adults. In short, Europe’s payment market is fragmented. This fragmentation is discussed further in a DossierPlus that investigates Europe's transition into a cashless society right before and after COVID-19.

Cash usage: which country uses it the least?

Statista estimates that Iceland, Sweden, Norway, Denmark and the United Kingdom were the European countries with the lowest cash money use in 2019. The exact size of cash money transactions is not known within Europe, however, as research on this topic is rare. According to figures from a survey released in early 2021 on 2019 - only the second iteration of a Europe-survey that investigates the use of coins and banknotes - cash was used most in southern Europe, as well as in Germany, Austria and Slovakia.

Payment digitalization in Europe mostly comes in the form of debit cards, as these were used more often than cash or credit cards in 2019. Digital wallets like Apple Pay or Google Pay were the least popular in-store payment option that year in France, Germany, Italy, Poland, Sweden and the U.K. This is a noticeable difference from, for example, China or the United States. One reason for this might be that some countries embraced contactless options on debit cards. The market share of contactless payments across different European countries, was, for example, 83 percent in Poland and 50 percent in Italy. Online shopping might influence digital payments in the future, although there were big differences in the B2C e-commerce market size of Europe’s countries in 2019.
This text provides general information. Statista assumes no liability for the information given being complete or correct. Due to varying update cycles, statistics can display more up-to-date data than referenced in the text.

Most popular payment method for online purchases in Germany
PayPal or similar options, 50%

Most popular payment methods for online purchases in Germany 2021

Most popular payment methods for online shopping in Spain 2021

Most popular payment methods for online purchases in France 2021

Visa, Mastercard share against domestic solutions in 15 countries in Europe 2020

Most popular payment methods for online purchases in Germany 2021 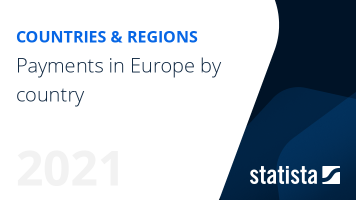 The most important key figures provide you with a compact summary of the topic of "Payments in Europe" and take you straight to the corresponding statistics.

Share of contactless payment transactions at POS in Europe