The Chicago Bears are a professional football team that compete in the National Football League (NFL) in the league's National Football Conference (NFC) North division. The Arizona Cardinals and the Bears are the only charter member franchises still in operation since the league's founding in 1920. Currently headquartered in Halas Hall at Lake Forest, Illinois, the Bears were founded in 1919 in Decatur, Illinois, before relocating to Chicago in 1921. The team currently plays their home games at Soldier Field on the Near South Side of Chicago.
In 2019, the Bears' average regular season home attendance was 61,916 and the average ticket price for a Chicago Bears' home game in that year amounted to 124.51 U.S. dollars. The team’s operating income during the 2019 NFL season stood at around 136 million U.S. dollars and its revenue for that year grew to approximately 477 million U.S. dollars, up from 124 million U.S. dollars in 2001. The team’s franchise value as of 2019 stood at around 3.5 billion U.S. dollars, making it the sixth most valuable franchise in the league. The Bears' principal owner is Virginia Halas McCaskey, daughter of legendary Bears coach and owner George Halas.

The Bears have won nine NFL Championships, including one Super Bowl in 1985, and have appeared in one other Super Bowl, which they lost to the Indianapolis Colts in 2007. The Bears have a strong presence across their social media channels, with a combined total of almost six million Facebook and Twitter fans and followers.
This text provides general information. Statista assumes no liability for the information given being complete or correct. Due to varying update cycles, statistics can display more up-to-date data than referenced in the text. 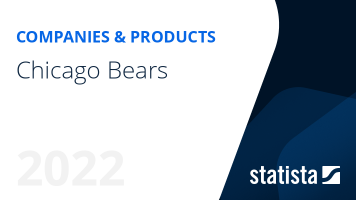 The most important key figures provide you with a compact summary of the topic of "Chicago Bears" and take you straight to the corresponding statistics.