The Detroit Lions are a professional football team that compete in the National Football League (NFL) in the National Football Conference (NFC) North division. The team was founded in Portsmouth, Ohio as the Portsmouth Spartans in 1930, before relocating to Detroit for the 1934 NFL season and switching to its current name thereafter.
The Lions currently play their home games at the Ford Field stadium in Downtown Detroit. In 2019, the team’s average regular season home attendance amounted to 61,342. Martha Ford is the chairwoman and majority owner of the Detroit Lions and, as of 2020, the team’s franchise value was estimated to be at around 2.1 billion U.S. dollars. In 2019, the Lions generated around 411 million U.S. dollars in revenue, with an operating income that amounted to about 43 million U.S. dollars.

The Detroit Lions have never won, nor made an appearance at, the Super Bowl, but were winners of four NFL championships in 1935, 1952, 1953, and 1957 before the AFL-NFL merger prior to the 1970 NFL season. The Lions last made an appearance in the playoffs in 2016, where they were beaten in the NFC wild card game by the Seattle Seahawks. The Lions have a combined total of 3.22 million Facebook and Twitter fans and followers.
This text provides general information. Statista assumes no liability for the information given being complete or correct. Due to varying update cycles, statistics can display more up-to-date data than referenced in the text. 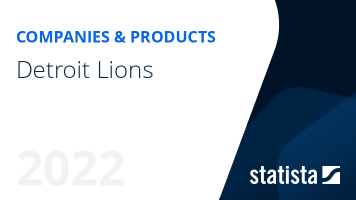 The most important key figures provide you with a compact summary of the topic of "Detroit Lions" and take you straight to the corresponding statistics.