Published by
Amy Watson,
Jan 16, 2019
Music awards are annually held award presentation ceremonies recognizing musical achievements in the industry for a specific year. Award shows also typically include performances by prominent artists. Some of the most significant music award ceremonies include the American Music Awards, MTV Music Awards and, the biggest of them all, the Grammy Awards, commonly referred to as the Grammys.
The influence of the Grammy Awards on music lovers all across the world is significant. For example, in 2017, Grammy nominees in the category for “Album of the Year” experienced a 291 percent increase in sales following the event. Since the award ceremony first began in 1958, the number of Grammy Awards categories has grown from a mere 28 to over a hundred between 2009 and 2011; there are currently 84 award categories, as of 2018. Music director, Quincy Jones, holds the record for being the most Grammy Award-nominated individual of all time with 79 nominations, while Hungarian-born orchestral conductor, Sir George Solti, is the most Grammy Award-winning individual of all time. In 2018, the number of Grammy Awards viewers amounted to around 19.81 million.

The average cost of a 30-second TV commercial spot during the Grammy’s is pegged at over one million dollars, whilst distribution of MTV Video Music Awards TV ad impressions is spread across major multinational companies such as GEICO, Trojan, Adidas, M&M’s, as well as Verizon Wireless. The MTV Video Music Awards was conceived in the 1980s by the MTV cable network as a viable alternative to the Grammys. The number of MTV Video Music Awards viewers hit its peak in the early 2010s. Over 12 million viewers tuned in to watch the awards show via the MTV network in 2011, but viewership has fallen to below the six million mark as of 2017.

The American Music Awards is another popular Grammy alternative created in the 1970s, with the number of American Music Awards viewers in 2017 standing at 9.05 million. Other award shows include the Latin Grammy Awards, recognizing achievements in Spanish and Portuguese music recordings. In 2017, the number of viewers of the Latin Grammy Awards aged 18-49 stood at around 1.3 million. There are also similar music award shows held in other parts of the world. For example, the Korean Music Awards is one of the major music awards shows in Asia. Canadians have the JUNO Awards and, in Italy, the David di Donatello Awards caters to original cinematic song performances in film.

The most important key figures provide you with a compact summary of the topic of "Music Awards" and take you straight to the corresponding statistics. 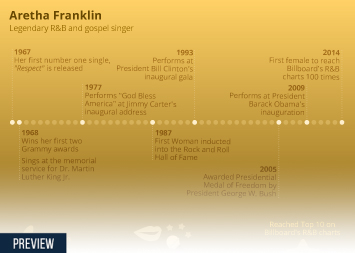 The Life of Aretha Franklin