Published by
Christina Gough,
Jun 25, 2021
The Charlotte Hornets are a professional basketball team that competes in the National Basketball Association's Eastern Conference Southeast Division. The Hornets were founded in Charlotte, North Carolina in 1988 by George Shinn, before relocating to New Orleans in 2002. In 2013, the New Orleans Hornets rebranded to become the New Orleans Pelicans and returned the Hornets name and records to Charlotte. The Charlotte Bobcats, established in 2004, officially adopted the original name for the 2014/15 NBA season.
The Hornets currently play their home games at the Spectrum Center in Uptown Charlotte. During the 2019/20 NBA season, the average regular season home attendance for a Hornets game was 15,438 per game and total attendance for that season amounted to 478,591. The Hornets generated around 240 million U.S. dollars in revenue in the 2018/19 season, with an operating income of 39 million U.S. dollars for that same year. The Charlotte Hornets’ current principal owner is former NBA all-star player and six-time Finals winner, Michael Jordan. Jordan acquired the franchise in 2010 with a purchase price of 175 million U.S. dollars.

Success for the Hornets has been limited, with the franchise having never achieved a conference or divisional title. The Hornets nevertheless have a strong presence on social media, with a combined total of around 2.7 million fans and followers on Facebook and Twitter.

In the following 4 chapters, you will quickly find the 33 most important statistics relating to "Charlotte Hornets". 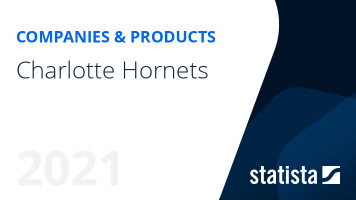 The most important key figures provide you with a compact summary of the topic of "Charlotte Hornets" and take you straight to the corresponding statistics.