Published by
Christina Gough,
Jun 28, 2021
The Indiana Pacers are a professional basketball team that compete in the National Basketball Association’s Eastern Conference Central Division. The franchise was established in 1976 as part of the American Basketball Association (ABA), before becoming a member of the NBA during the ABA-NBA merger in 1976.
The Pacers currently play their home games at Bankers Life Fieldhouse in Downtown Indianapolis. During the 2019/20 NBA season, the average regular season home attendance for a Pacers game was 16,531 per game and total attendance for that season amounted to 529,002. The Indiana Pacers generated around 217 million U.S. dollars in revenue during the 2019/20 season, and in that same season the team’s operating income stood at about 39 million U.S. dollars. The Pacers have an estimated franchise value of around 1.55 billion U.S. dollars and are currently owned by Herbert Simon. Together with his now deceased brother, Mel, Simon bought the Pacers for 11 million U.S. dollars in 1983 - the lowest purchase price among current NBA franchises.

The Indiana Pacers won three ABA championships between 1969 to 1971, but have never won an NBA title. The Pacers made the playoffs for the fourth successive time in the 2018-2019 season, but were knocked out in the first round by the Boston Celtics. The franchise has a combined total of approximately 4.47 million fans and followers on Facebook and Twitter.

In the following 4 chapters, you will quickly find the 33 most important statistics relating to "Indiana Pacers ". 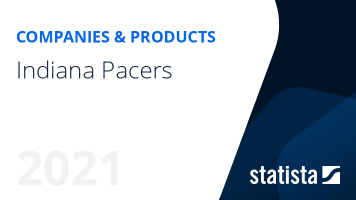 The most important key figures provide you with a compact summary of the topic of "Indiana Pacers " and take you straight to the corresponding statistics.