Published by
Christina Gough,
Jul 1, 2021
The New Orleans Pelicans are a professional basketball team that compete in the National Basketball Association’s Western Conference Southwest Division. The team was founded as the New Orleans Hornets in 2002 following the relocation of the Charlotte Hornets franchise to New Orleans and was later renamed the Pelicans in 2013.
The Pelicans play their home games at the Smoothie King Center in New Orleans, Louisiana. During the 2019/20 NBA season, the average regular season home attendance for a Pelicans game was 16,505 and total attendance for that season amounted to 528,172. The team generated around 209 million U.S. dollars in revenue during the 2019/20 season and, in that same season, had an operating income of approximately 44 million U.S. dollars. As of 2020, the franchise value for the New Orleans Pelicans amounted to an estimated 1.35 billion U.S. dollars and the team is currently owned by American businessman Tom Benson.

The Pelicans have made six play-off appearances since their inception, but have never appeared in either an NBA conference final nor a championship final. The franchise has a combined total of around 2.84 million fans and followers on Facebook and Twitter.

In the following 4 chapters, you will quickly find the 33 most important statistics relating to "New Orleans Pelicans ". 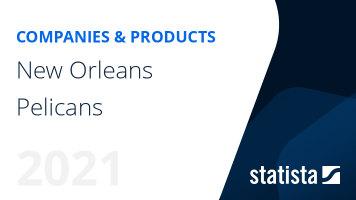 The most important key figures provide you with a compact summary of the topic of "New Orleans Pelicans " and take you straight to the corresponding statistics.