Smart cities, also commonly known as digital cities, intelligent cities, and wired cities, are urban areas that collect electronic data from citizens, devices, and assets to manage available resources more efficiently. A wide range of information and communications technology (ICT) applications are used to enhance knowledge and innovation, reduce costs and resource use, promote living and working environments, and increase the communication between government and citizens.

The concept of smart cities

There are dozens of ways to define a smart city based on the types of technology implemented and its goals. The developments of ubiquitous cities (U-Cities) in South Korea are one example. U-Cities aim to connect citizens to any service through a smart device. Knowledge cities focus on the innovation of the knowledge economy and subsequently aim to increase their skilled workforce.

A digital city is defined as a city that allows for increased interconnection and information sharing. Despite a wide range in the purposes behind smart cities, they generally promote the efficient use of physical infrastructure. Smart cities are a collaborative effort between the population, businesses, and the government to improve the quality of life on a broad scale in a city.

Cellular and IoT connectivity is key for smart cities

The realization of smart city concepts relies on the adoption of IoT communication technologies like low-power wide-area networks (LPWAN) and cellular networks such as 4G/LTE and 5G. The newest generation mobile network, 5G, promises exponentially higher data speeds and ultra-low latency than the currently widespread 4G. Therefore, the rollout of these connectivity technologies is a critical factor in bringing about the maturation of smart city projects. Such technologies also lay the foundation for the Internet of Things (IoT) – a vast network of smart devices that work together to collect and analyze data and perform actions, making smart cities possible.

Segments and use cases

Information and communications technology is used in smart cities for a wide range of urban services, including hospitals, traffic and transportation, power plants, water supply, waste management, and law enforcement. Smart connections aim to meet market demand and use the city’s public resources across many different use cases more efficiently. Overall the smart infrastructure segment is projected to be the largest segment over the next five years. The revenue from smart city infrastructure is forecast to grow to more than 100 billion U.S. dollars by 2025, a share of more than 40 percent of the total smart city revenue worldwide.

Cities can for example promote the adaption of smart electricity metering, use sensors to detect leakage and pollution in water infrastructure and resources. Sensors can be placed in city waste containers to determine when they are full, or implement dynamic traffic light sequences, among thousands of other possibilities. As the inevitability towards increasing and aging urban populations, changing climates and economies, and a substantial shift towards online consumption become evident, the proliferation of using various aspects of smart cities becomes a necessity.
This text provides general information. Statista assumes no liability for the information given being complete or correct. Due to varying update cycles, statistics can display more up-to-date data than referenced in the text. 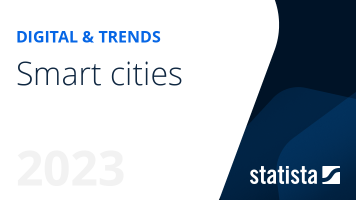 The most important key figures provide you with a compact summary of the topic of "Smart City" and take you straight to the corresponding statistics.