Published by
Christina Gough,
Jul 4, 2021
The Washington Wizards are a professional basketball team that compete in the National Basketball Association’s Eastern Conference Southeast division. The team was established in Chicago in 1961 as the Chicago Packers abd relocated to Baltimore in 1963 to become the Baltimore Bullets. The franchise then changed its name to the Capital Bullets in 1973 and then to the Washington Bullets when it moved to Washington the following year. The team rebranded and adopted its current name, the Washington Wizards, in 1997.
The Wizards play their home games at the Capital One Arena in the Chinatown area of Washington D.C.. During the 2019/20 NBA season, the average regular season home attendance for a Wizards game was 16,646 and total attendance for that season amounted to 532,702. The team’s current franchise value stands at around 1.8 billion U.S. dollars, while its operating income amounted to about 39 million U.S. dollars in the 2019/20 regular season. In that same season, the team generated revenue of around 231 million U.S. dollars. The team is currently owned by Monumental Sports & Entertainment CEO, Ted Leonsis.

The Washington Wizards appeared in four NBA finals when they was called the Bullets - in 1971, 1975, 1978, and 1979 - and won their only NBA championship title to-date in 1978. The Wizards have a combined total of approximately 5.78 million fans and followers on Facebook and Twitter.

In the following 4 chapters, you will quickly find the 33 most important statistics relating to "Washington Wizards ". 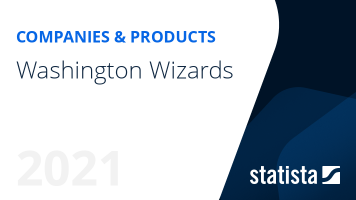 The most important key figures provide you with a compact summary of the topic of "Washington Wizards " and take you straight to the corresponding statistics.