The United Kingdom's (UK) acceptance and willingness to use contactless payments may have had a slow beginning, but now there seems to be no stopping this train. The UK's ability to embrace the relatively new payment method is predicted to skyrocket over the coming years, with the average monthly number of contactless payments from adults estimated to rise from two in 2015 to fourteen by 2025. In April 2017, there were over 416 million contactless transactions using debit and credit cards alone, the value of these transactions reaching over 3.9 billion British pounds.
One of the main reasons behind its huge insurgence has not only been convenience, but also the monetary investment financial institutions have made bringing contactless terminals into the United kingdom, with over 490 thousand processing payments in 2017. Another success seen for contactless card payments was their introduction into London transport systems. Revenue made through contactless card payments has almost doubled between January 2016 and September 2017. It is not only in transport where contactless payments have been a huge success. In clothing stores alone, annual spending through this method has seen an increase of over 320 percent in 2017.

In a 2016 survey, 90 percent of participants agreed that not having to enter a PIN in front of others was a benefit of contactless payments. The convenience and speed of PIN-free payments using contactless credit and debit cards have been the main drivers behind its growing success, but they were not the only reasons. Consumers can make payments using their smartphones with Apple and Android Pay and mobile devices through the likes of Google Pay Send and PayPal. Other forms of contactless payments that have arisen include key fobs, smartwatches, wristbands and other devices using near field communication (NFC). Although the adoption of payments using so-called mobile wallets has been slow to take off, we may see a significant change in the near future. Now over half of contactless payment terminals accept Apple Pay transactions and unlike their card equivalent there is no maximum spend. It is perhaps no surprise that this new wave of mobile payments will most likely be driven by the young, with approximately 60 percent of Apple and Android Pay users being under the age of 34 as of 2016.

Although there is no daily limit as to the amount of times a consumer can use their contactless card, there is a maximum transaction spend of thirty British pounds. The main reason behind this was the risk of fraud, although a study conducted found that only 2.7 pence of every one hundred British pounds spent in the United Kingdom using contactless cards was deemed to be fraudulent in 2016. In spite of this, almost one quarter of respondents to a 2016 survey believed being contactless made card fraud too easy. With so little fraud and so much convenience it appears that contactless is the future of payments, but by what method we have yet to see.
This text provides general information. Statista assumes no liability for the information given being complete or correct. Due to varying update cycles, statistics can display more up-to-date data than referenced in the text.

Credit cards in circulation in the UK
60.38m

Global QR payment market size in 2020 with forecasts to 2025, by region 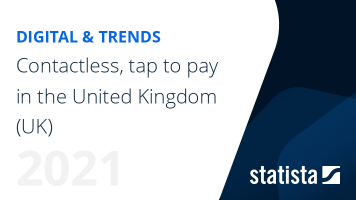 The most important key figures provide you with a compact summary of the topic of "Contactless payments UK" and take you straight to the corresponding statistics.