Published by
Raynor de Best,
Aug 18, 2021
The coronavirus pandemic sped up digital payment developments across the world, and the United States was no exception. Indeed, the United States saw a bigger increase in NFC penetration than other countries worldwide: In 2021, more than four out of 10 U.S. smartphone users had used a contactless payment at least once – a figure comparable to South Korea. NFC is but one type of mobile payments, a category that can include mobile wallets used in a physical store, but also QR code payments or PayPal transactions via a smartphone. PayPal, especially, is popular in the United States but, although both are classed as a “mobile payment” option, function somewhat differently. Regardless, many U.S. consumers experienced mobile payments for the first time during the pandemic to avoid the use of paper currency as well as debit and credit cards. Younger age groups, especially, tried these payment methods.

(Mobile) payments in the U.S.: the rise of debit

Traditionally, the United States uses more credit payments than debit payments. This can be seen, for instance, in the number of credit and debit cards in the country: The amount of credit cards is over three times that of debit cards. The coronavirus pandemic, however, changed this picture, as sources stated in August 2021 that debit payments soared in 2020. This would change the distribution of debit and credit spend in the United States, as debit spend would now overtake credit spend for the first time. This can be attributed to several factors, like changing consumer behavior as they shift focus to certain product categories and a change in consumer preferences on how to pay. Examples of the latter include buy now, pay later but also a growing use of mobile wallets like Apple Pay in the U.S. – payments which rely more on debit than on credit.

When would mobile payments be used?

Supermarkets, stores and restaurants were popular places for contactless mobile payments in 2020, as nearly three out of 10 respondents stated they wanted to use their smartphone more often for payments. As mentioned before, PayPal is also popular in the United States – although the company itself does not specifically mention how much. For instance, the number of active PayPal accounts was said to be over 400 million in 2021 – up by over 70 million since early 2020 – but does not share how much of these were in the U.S. Direct money transfer services such as PayPal were a popular tool for peer-to-peer payments in the United States in 2020. Whether PayPal counts as "mobile payment" depends on whether the transactions are performed with a smartphone or not.

In the following 7 chapters, you will quickly find the 26 most important statistics relating to "Mobile payments in the United States".

The most important key figures provide you with a compact summary of the topic of "Mobile payments in the United States" and take you straight to the corresponding statistics.

Mobile banking in the U.S. 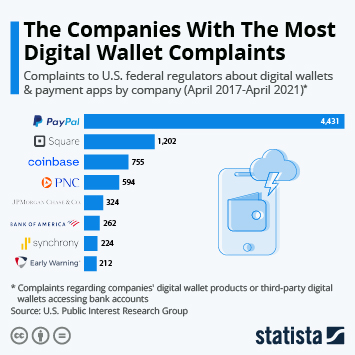 The Companies With The Most Digital Wallet Complaints 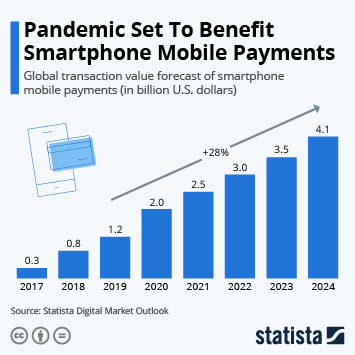