Brazil is one of the largest consumer markets of alcoholic beverages in the world. In 2018, the South American country was ranked third among the leading nations worldwide in consumption of alcoholic beverages, only after China and the United States. The Brazilian alcoholic drinks industry generated an annual net revenue of 128 billion Brazilian reals in 2018, having grown steadily from 56 billion reals in 2010.
The alcoholic beverage market includes beer, wine, and spirits. Beer is the most consumed alcoholic beverage in Brazil, based on quantity. Beer consumption was expected to reach 13.5 billion liters by 2021. On the production side, the country was the second largest beer producer in the Americas, following the United States. Leading Brazilian beer brands such as Skol, Brahma, Antarctica and Bohemia were among the country’s most valued brands in 2017. Craft beer constitutes one of the most promising segments: with 679 craft beer breweries registered in 2017, the craft beer market was expected to grow from a share of 0.7 percent of the beer industry in 2016 to nine percent in 2022.

Brazil is considered an emerging wine-producing country worldwide. Internationally known for its sparkling wine, Brazilian wine exports amounted to nearly 14 million U.S. dollars in 2017. The southern state of Rio Grande do Sul is the most important region regarding vineyard surface area, wine production, sales volumes and exports. With around two liters of wine consumed per person per year, wine consumption in Brazil is still significantly lower than in top wine-consuming countries around the globe.

Cachaça, a distilled spirit produced from sugar cane, is the favorite hard alcoholic beverage among Brazilians. Brands such as Cachaça 51, Pitú, Velho Barreiro and Ypióca are increasing their international presence. In 2018, Brazil exported over 8.6 thousand metric tons of cachaça, with a total export value of 15.6 million U.S. dollars.
This text provides general information. Statista assumes no liability for the information given being complete or correct. Due to varying update cycles, statistics can display more up-to-date data than referenced in the text.

Brazilian imports of alcoholic beverages in 2020
1.1b USD 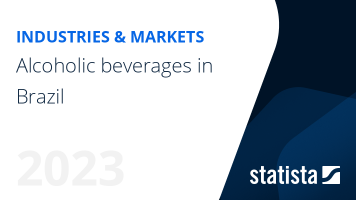 The most important key figures provide you with a compact summary of the topic of "Alcoholic beverages in Brazil" and take you straight to the corresponding statistics.