Published by Jan Conway, Sep 5, 2022
Beer is the most widely consumed alcoholic beverage in the world and has been a part of human culture for thousands of years. Today's global beer market continues to see yearly increases in revenue with the beginning of the COVID-19 pandemic being a notable exception. 2021 saw a recovery in the market as revenue exceeded 651 million U.S. dollars, up 11 percent over the previous year.

On-premise beer sales dropped by over 20 percent in 2020. On-premise growth did rebound substantially as consumers were eager to enjoy the social freedoms curbed during the lockdowns of the previous year. Despite strict lockdowns, China was the leader in global beer consumption in 2020.

Leading countries in the beer market

In terms of beer production, China was also the world leader, producing over 341 million hectoliters of beer in 2020, over 60 percent more than the amount produced by the United States. When it comes to trade, Mexico reaped the largest profit from beer exports, shipping over five billion U.S. dollars worth in 2021. The United States was by far the world's biggest buyer, importing beer valued at over 6.6 billion dollars.

The leading companies in the global beer market are giants such as AB Inbev, Heineken Holding, Kirin Holdings, and Asahi Group Holdings. AB InBev topped the ranking with sales amounting to about 46.8 billion U.S. dollars in 2021. The company's iconic beer brand Budweiser had a global brand value amounting to about 16.2 billion U.S. dollars in 2021. Heineken and Stella Artois rounded off the top three most valuable beer brands in that year.

In the following 5 chapters, you will quickly find the 23 most important statistics relating to "Global Beer Industry". 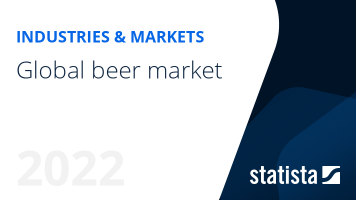 The most important key figures provide you with a compact summary of the topic of "Global Beer Industry" and take you straight to the corresponding statistics. 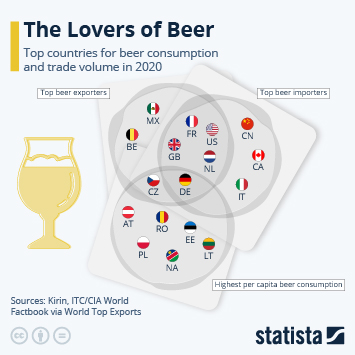 The Lovers of Beer 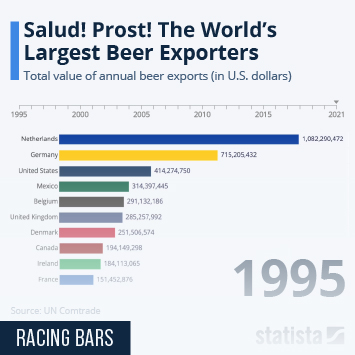