Published by
T. Ozbun,
Jan 24, 2022
From the Atacama Desert, all the way through the Central Valley, and up to the Austral region, Chile's variety of landscapes and geographical features make it an ideal environment for wine production. As a result, the country is one of the main wine exporters in the world, leading the market along with European countries such as Italy, France and Spain.

With close to 12 million hectoliters in 2019, Chile holds the second place in Latin America’s wine production. As of 2018, the country housed a total of 194 thousand hectares of vineyard surface area, of which nearly 71 percent were cultivated with vitis vinifera. That same year, nearly three out of four hectares were constituted by red grape vines. Accordingly, the country specializes on fine wine with designation of origin, being the red varietal Cabernet Sauvignon the one standing out as the most produced type.

Chilean wine in the world

Along with white varietals such as Sauvignon Blanc and Chardonnay, Cabernet Sauvignon belongs to the most widely exported Chilean wine varieties. Though enjoyed all around the world, the leading countries of destination of wine coming from the South American country encompass, among others, English-speaking nations, such as the United States and the United Kingdom. However, China holds the title of top Chilean wine export partner, with a value amounting to nearly 331 million U.S. dollars in 2019.

Wine tourism, also known as enotourism, refers to travel with the objective of pursuing activities related to wine, such as tasting, consuming, and buying of this famous alcoholic beverage. In Chile, the encounter with wine is not limited to its sales. The country provides national and international tourists with immersive experiences through its wine routes around its vineyards.  Enjoyed equally by men and women, the various wine trails are some of the preferred national touristic destinations in Chile.

In the following 6 chapters, you will quickly find the 30 most important statistics relating to "Wine industry in Chile ".

Statistics on the topic
Exports value of wine with designation of origin
1.45 bn USD
Leading country of destination of exported wine
China
Most exported kind of varietal wine
Cabernet Sauvignon 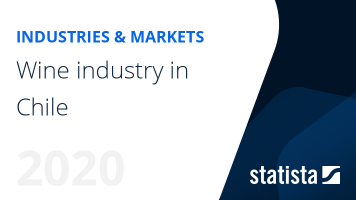 The most important key figures provide you with a compact summary of the topic of "Wine industry in Chile " and take you straight to the corresponding statistics.