The Houston Astros are a professional baseball franchise competing in Major League Baseball. The team is a member of the American League's West division. It was established in 1962 as the Houston Colt .45s and began playing as the Astros in the 1965 season after moving to the NRG Astrodome, the world's first multi-purpose, domed sports stadium. Jim Crane has been the team's owner since 2011.
The franchise value of the Houston Astros has seen a surge over the past five years, reaching 1.87 billion U.S. dollars in 2021, which corresponds to the average franchise value in MLB. In 2020, the team generated about 126 million U.S. dollars in revenue. The operating income of the Astros for that season amounted to a deficit of 76 million U.S. dollars, a harsh decline in that year as will all other professional sports clubs due to the COVD-19 pandemic.

More than two million people attend games of the Houston Astros each season at Minute Maid Park in Downtown Houston, Texas, which has been the home for the team since 2000. The average regular season attendance reached over 35 thousand in 2019, a small decrease compared to the previous year. The average ticket price for games of the Houston Astros has increased over the past few years, amounting to over 49 U.S. dollars for the 2019 season. The team’s Twitter and Facebook accounts have over one million fans/followers each.
This text provides general information. Statista assumes no liability for the information given being complete or correct. Due to varying update cycles, statistics can display more up-to-date data than referenced in the text. 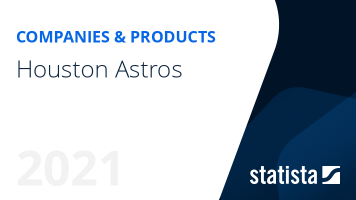 The most important key figures provide you with a compact summary of the topic of "Houston Astros" and take you straight to the corresponding statistics.